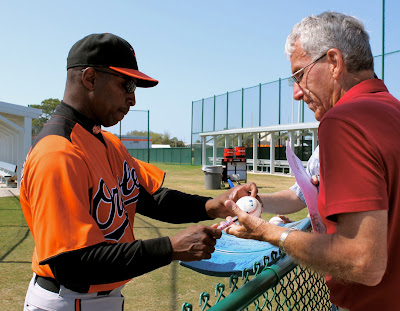 It was fun to capture this photo of Willie Randolph mingling with fans and signing autographs, particularly since I grew up collecting baseball cards of him.  Imagine that!  Willie was an All-Star second baseman for the New York Yankees and now is a bench coach for the Baltimore Orioles.  He was quite pleasant interacting with fans, which was really nice to see  (He kept saying, 'Okay, last one', referring to autographing memorabilia, and then he'd sign more.)  One of the nice aspects of living and working so close to Ed Smith Stadium, is that I can buzz by during lunch and check out what's going on.  The Orioles constructed a new viewing area for fans to watch the players practice.  So, last week, I parked and strolled to the new area (it's quite nice), snapped a few shots of Willie and left in less than ten minutes.  Sweet.  By the way, from what I hear, the home opener earlier this week went really well.
Posted by SRQ at 12:04 AM

How nice to get some up close photos of one of your childhood idols!

It went really well if you were an Orioles fan and not a Rays fan like me lol.

Even though Willie Randolph spent most of his career in pinstripes -- which I consider and emblem of moral turpitude -- he was a good player and apparenetly a good guy.

Re your comment today on my blog, NBMAA has an American art collection from pre-colonial days to last week. It is superb. If ever you find yourself in the area with time on your hands, definitely give it a try.

Neat..seems like a good guy. I was a baseball addict for one season - when I lived in Los Angeles and the Dodgers came from the bottom to win the World Series.

How cool is that!