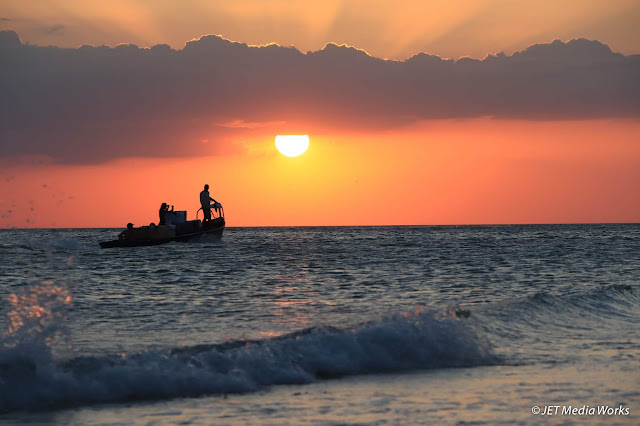 After being in existence for 10 years, it's time to sunset Sarasota Daily Photo.  When I launched SDP I never thought it would be around for so long or I would meet so many interesting people around the world via the blogosphere.  I even met Jack of Naples and Hartford in Season and Kay of Sequim Daily Photo in person  -  what a wonderful treat!

With it becoming increasingly difficult to post and interact on Blogger in a convenient way, I've been focusing my time on Instagram.  It's a very welcoming community for those wishing to share photos and learn about photography.  I was pleased to discover several individuals from the City Daily Photo community are on Instagram.  Feel free to find me. I'm SRQJET (surprise, surprise!).

From the entire Sarasota Daily Photo staff, thank you for letting us into your lives over the past decade.  It's been a great pleasure.

P.S.  This photo was captured by the Editor in Chief last week on beautiful Lido Beach on the Gulf of Mexico in the Sarasota city limits.
Posted by SRQ at 12:04 AM 19 comments 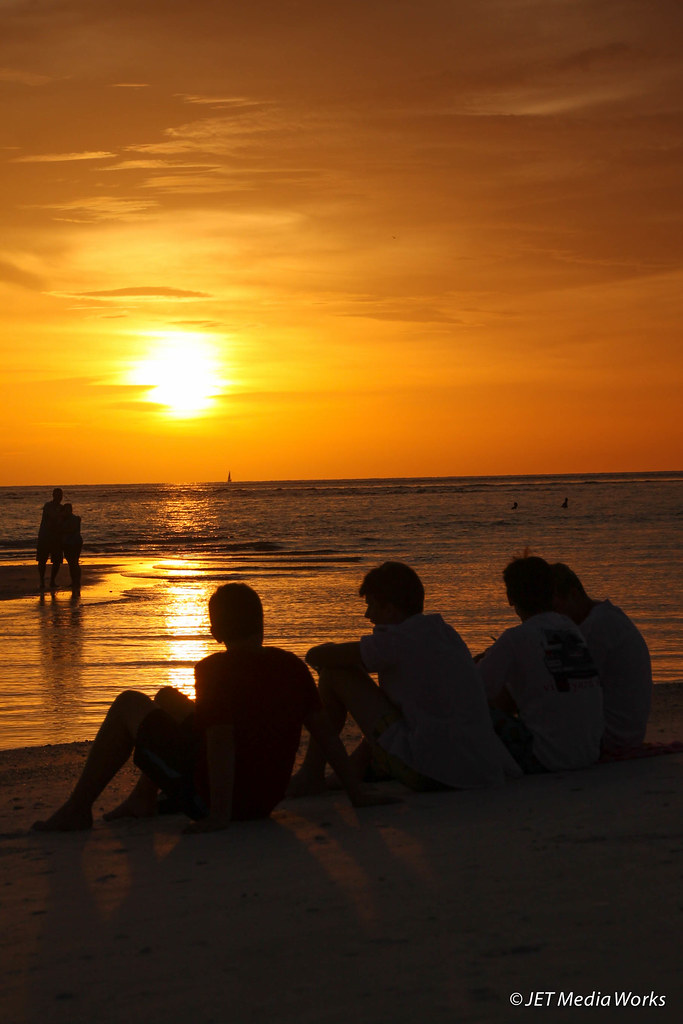 With today marking the traditional end of summer, it's time to look back and wonder where the time went!  I snapped this pic back in July on Lido Beach and still love it...the glow of the sunset, the couple standing next to the water, and four teenage boys hanging out together on a hot Friday night enjoying the simplicity of sunset.

Unfortunately, Summer 2018 will be remembered as the Summer of Red Tide.  A couple of weeks after I took this photo, the beach was overwhelmed with naturally occurring red tide killing thousands of tons of marine life (manatees, dolphins, turtles, sharks and fish).  The images have been heartbreaking.  Stretching 150 miles along the west coast of Florida, the red tide bloom has been an environmental disaster, prompting the State of Florida and local governments to declare a State of Emergency.

As it happens, the global leaders in red tide research, Mote Marine Laboratory, are based here in Sarasota.  While they say red tide blooms have been documented for centuries and are naturally occurring, this tiny toxic organism seems to be exacerbated when it comes in contact with nutrients near shore (read:  fertilizer residue etc.).  Researchers are working around the clock to find solutions and have one promising experiment underway in Southwest Florida.

The good news is that with recent favorable winds, the red tide appears to be diminishing:  less pungent smell and fewer fish kills.  The water is still dark brown near shore, though, according to reports.  One of the effects of red tide is a strong odor that can impact one's respiratory system.  So, I haven't been to the beach since I took this photo.  We're cautiously optimistic the tide is turning (so to speak) and the red tide bloom goes out to sea and dissipates soon.

Hope everyone in the blogosphere had a great summer!
Posted by SRQ at 9:15 AM 7 comments 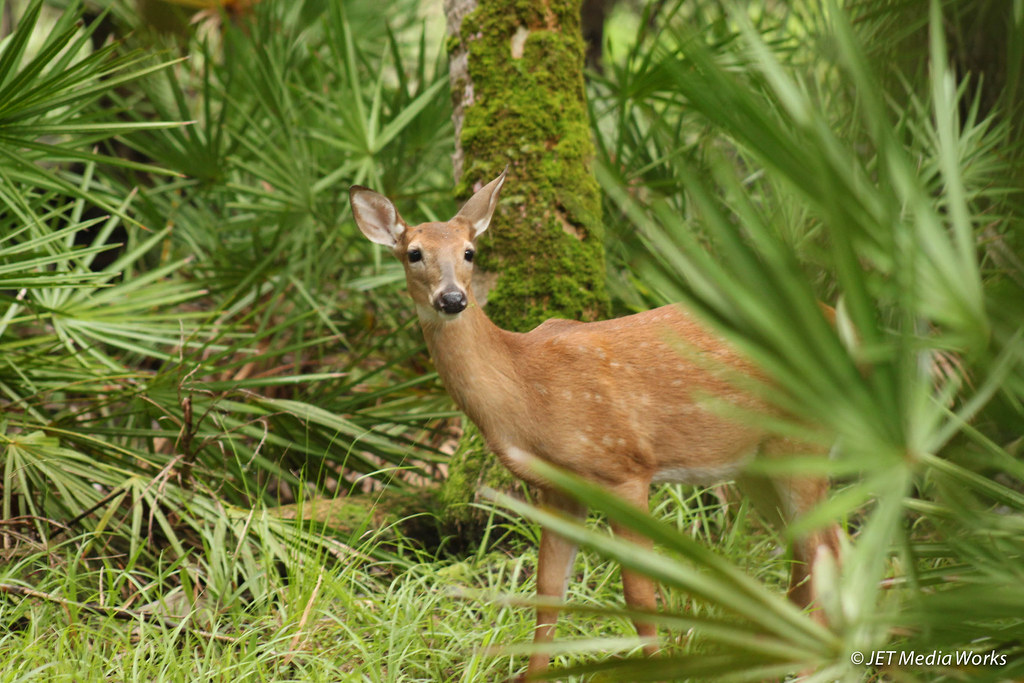 "Oh, dear.  I've been spotted."
Had a great encounter with this fawn and its mother at Myakka River State Park the other night.  While this young one was a bit skittish and kept its distance, mom nearly bumped into me along the side of the road, she was so focused on nibbling greens.  Must say, I've never had such a close encounter with deer here before.  Very sweet!  Hope everyone is well in the CDP blogosphere.
Posted by SRQ at 12:03 AM 3 comments 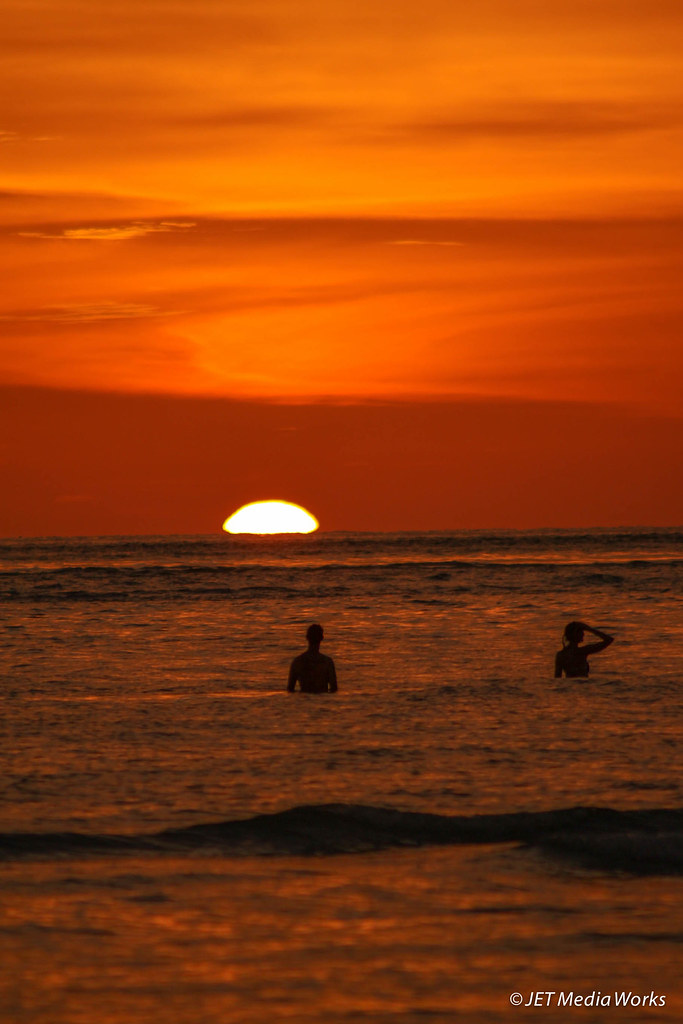 Friday the 13th on Lido Beach in Sarasota.  Nothing too scary about this scene!
Hope everyone is having a terrific weekend.
Posted by SRQ at 12:03 AM 6 comments 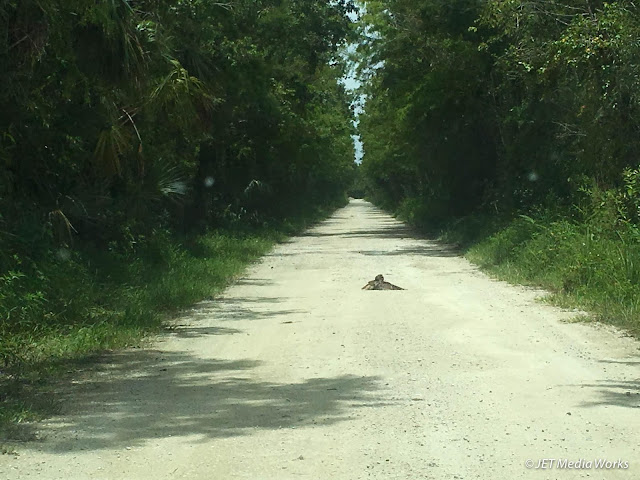 Driving down a fairly deserted gravel road deep in swamp country near the Everglades, I spotted this  brown blob in the middle of the road, which hadn't been there 15 minutes earlier.  My first thought was...BABY GATOR!   But, as I got closer, it didn't move.  So, then, I thought it was a small pile of palm fronds.  No...and...no!  It was a barred OWL -- just sitting there.  Naturally, the Junior Editor and I  suspected it was hurt and immediately started contemplating how we could rescue it, once we pulled off the road.  Moments after turning off the car engine, this happened....

(Click play.  The video will play.  There just isn't a thumbnail preview.)

The owl flew a short distance to a tree...apparently not injured at all!  So, I scrambled to get out the 'ol Canon. 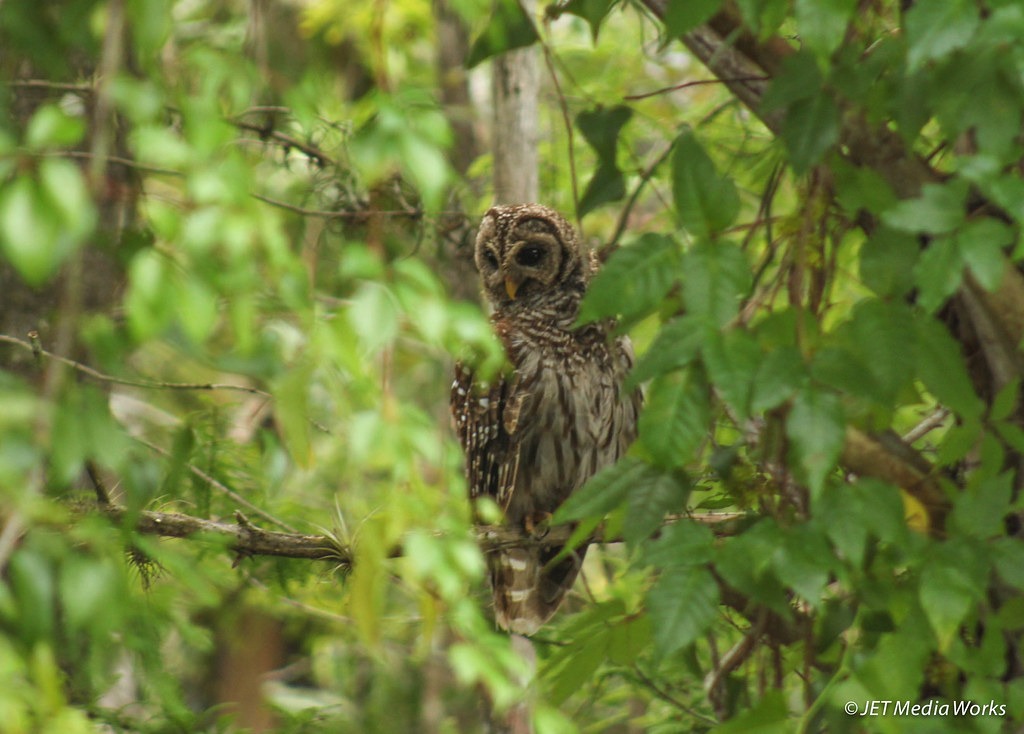 I successfully snapped this one quick shot before -- of all things -- a dump truck rumbled by and scared it away. (Odd seeing the owl sitting in the road...and odd for a dump truck to be there in the middle of nowhere -- although the crew was making some needed repairs to the gravel road.)  Fascinating encounter!  Wish we could've had more time with the owl, but happy the SDP team was able to document this activity.  Hope everyone is doing well in the Blogosphere!
Posted by SRQ at 12:03 AM 8 comments 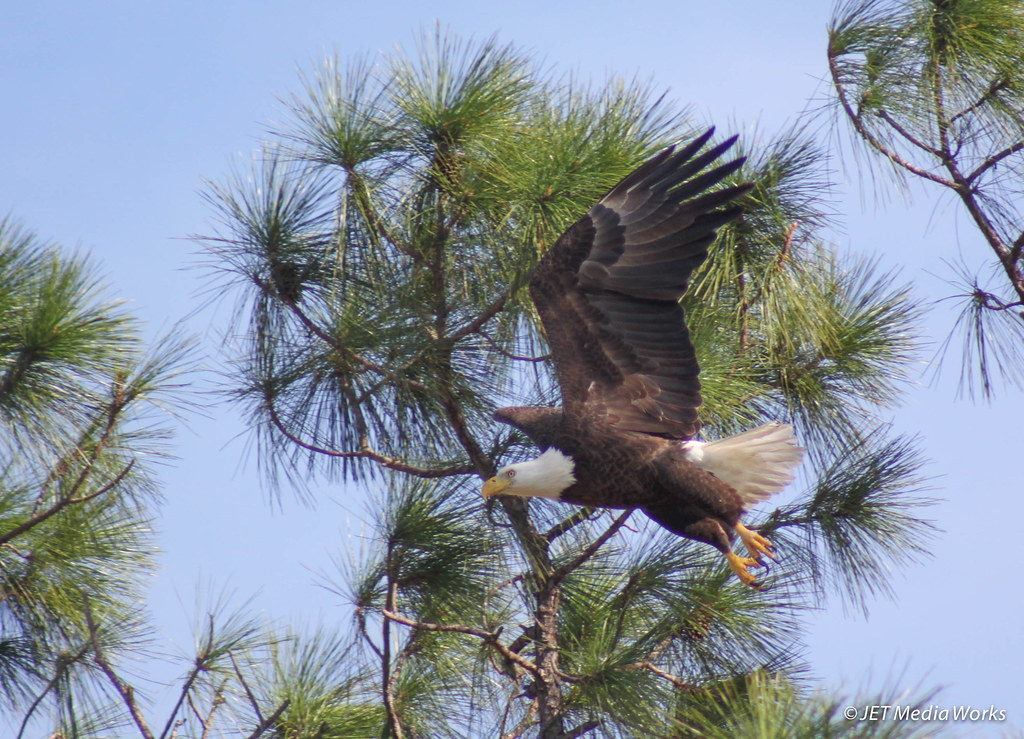 Hope you're soaring into a safe and fun holiday! Spotted this beautiful bald eagle in flight near Ft. Myers recently. Happy 4th of July...and God bless America!
Posted by SRQ at 12:03 AM 5 comments 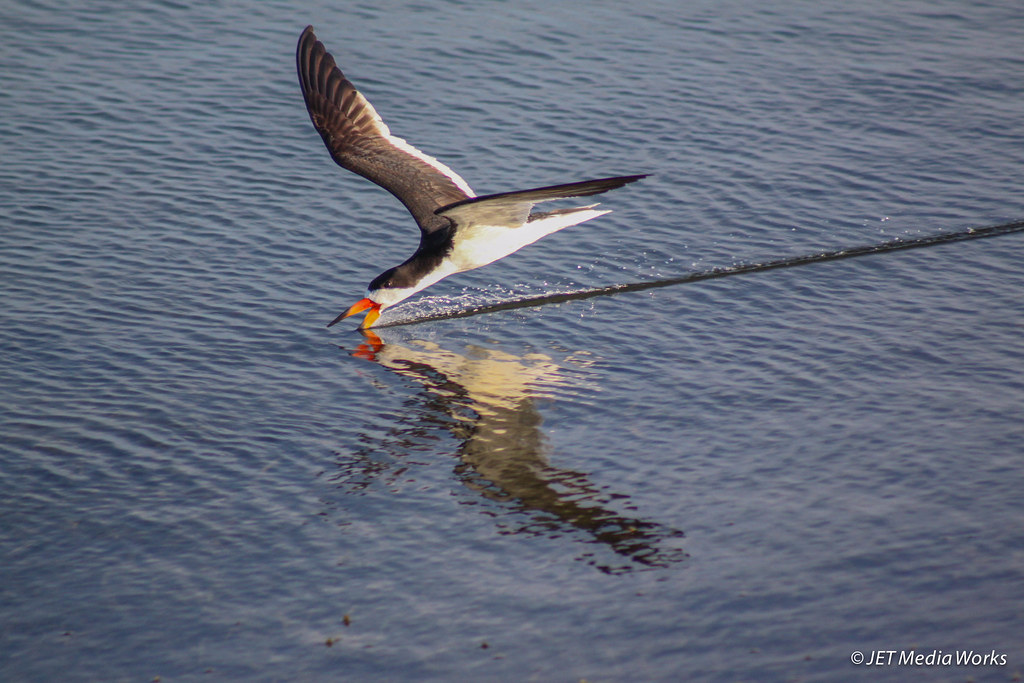 Putting the 'skim' in black skimmer! Spotted this guy at Ken Thompson Park streaking over Sarasota Bay at dinner time scooping up little fish near the surface.  First time I've seen black skimmers here, usually they hang out a few miles south on Lido Beach.
Posted by SRQ at 7:04 AM 6 comments