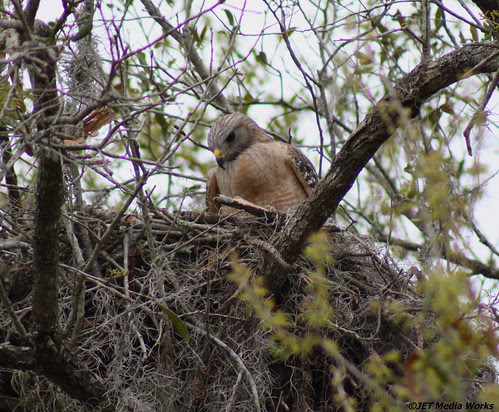 This is why the pedestrian bridge at Urfer Family Park in Sarasota is temporarily closed: red shouldered hawks are nesting. Children playing loudly on the playground nearby don't bother the hawks at all. But, apparently, they get upset when people walk over the bridge, which is quite close to their nest. The hawks actually become defensive and have been known to swoop down and smack people across the head. (I met a woman who told me her personal account of being swatted in the head by one of the hawks.) The hawk in this photo, I believe, is the female. Even from a distance, Henrietta (as I've nicknamed her) looks quite substantial. I certainly wouldn't want to mess with her. The entire time I was there, she was quite vigilant, standing guard over her nest, staring into the distance (no doubt wondering where her mate (who I've named Henry) had disappeared. Occasionally, she glanced down, presumably to check on her eggs. They should hatch anytime...with the little ones learning how to fly within 6-weeks. I cannot wait to catch a glimpse of them! In the meantime, I'm enjoying my hawk behavioral observations from a safe distance.  By the way, a huge tip of the hat to SDP follower (and MSU Spartan fan) Daniel, who emailed me about this nest. Thanks!
Posted by SRQ at 12:04 AM 10 comments 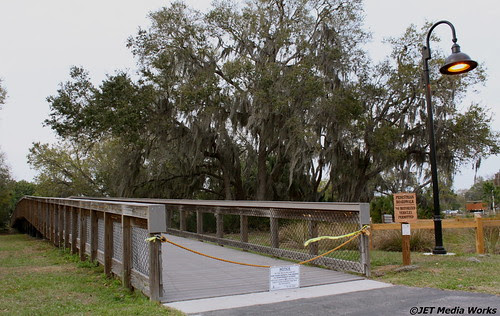 Welcome to Urfer Family Park in Sarasota!  I've been wanting to visit this park since it opened a couple of years ago, and finally went there this past weekend.  Here's the background:  Sarasota County purchased 55 acres from the Urfer family and turned it into a wonderful recreational area with trails, picnic areas, playgrounds as well as wide open space.  (Believe it or not, the park is adjacent to a busy road.)  It's a great area for families....which leads me to today's photo. The pedestrian bridge is closed due to a resident family.  And with that little tease, the SDP staff is busy behind the scenes gearing up for another series.
Posted by SRQ at 7:00 AM 5 comments 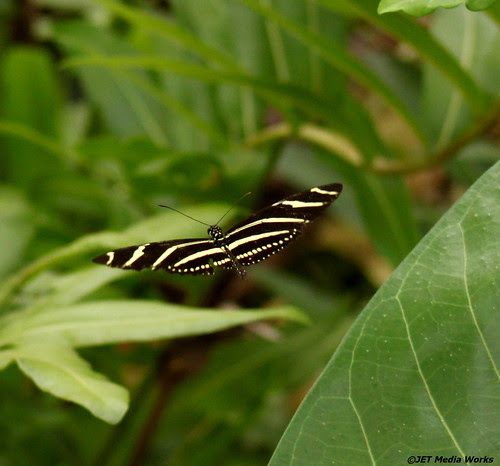 This Zebra Longwing was one of many butterflies fluttering by me during my recent visit to Butterfly Estates.  Between it being captured in-flight, soaring past that oversized leaf, and hovering over those smaller leaves, this photo almost has a 3-D feel to it. Fflutttterrrrrrr! And, this concludes our visit to Butterfly Estates.  Staff is already looking forward to returning!  (Prior to the next visit, though, perhaps a requisition for a macro lens will need to be submitted to the SDP Chief Operating Officer.)
Posted by SRQ at 12:04 AM 7 comments 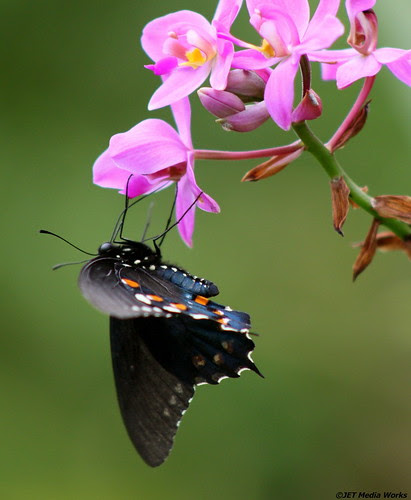 Sometimes Mother Nature really outdoes herself!   I love these color combinations:  the black, orange, white, blue, lavender, green -- amazing.  This is yet another photo I took while visiting Butterfly Estates.  I think this series will conclude tomorrow with an in-flight photo.  'Til then, we've reached our cruising altitude and it's safe to walk around the City Daily Photo cyber-cabin. Hope everyone is having a wonderful weekend!
Posted by SRQ at 10:23 AM 7 comments

King of the Hill 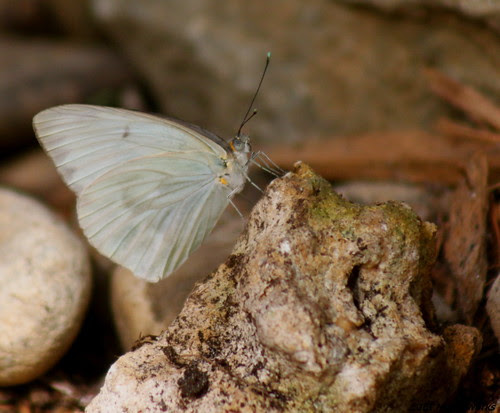 When pursuing butterflies at Butterfly Estates, I discovered it helps to look down occasionally. That's where I discovered this Great Southern White Butterfly sitting on a rock.  Nice of it to land on something with a contrasting tone and texture to help show itself off.  I love that eyeball and those turquoise-looking antennae.
Posted by SRQ at 12:02 AM 5 comments

Up, Up and Away 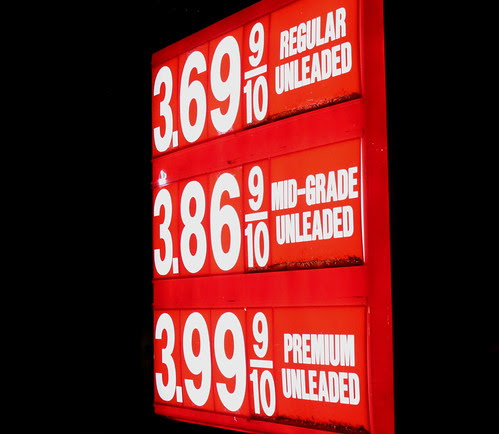 We're interrupting our butterfly series for our gas price series.  Since we discussed gas prices last month, the price for one gallon of unleaded has gone up 18-cents.  Between December and January, we saw prices jump 24-cents. That's 42-cents in just two months! Good grief. Those who check in with SDP regularly know that I've been documenting gas prices for the past 11 months at the same gas station.  To see the month-to-month documentation click the label 'gas prices' below.
Posted by SRQ at 12:04 AM 5 comments 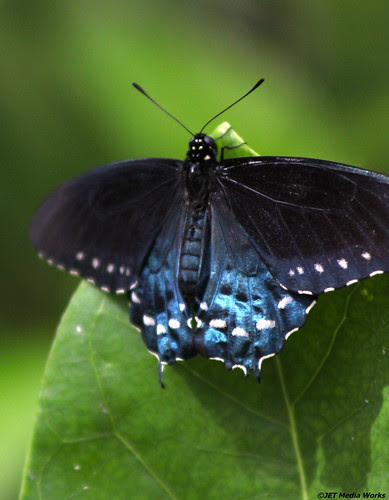 Continuing with our series from Butterfly Estates, the SDP staff offers this lovely black and blue and white creature.  What amazing colors!  I was thrilled when it landed on this bright green leaf, which really accentuated its colors.  I'm about 98% sure this is a spicebush swallowtail butterfly.  Whatever the species, it's eye catching.
Posted by SRQ at 12:02 AM 5 comments 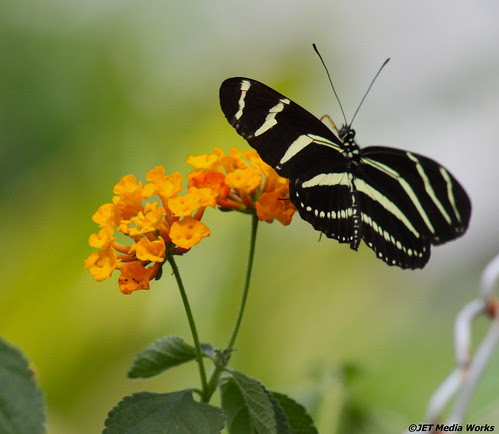 Two posts ago, I mentioned I visited Butterfly Estates in Ft. Myers. The environment was a pleasant mix of  serenity and hyperactivity (the butterflies and the photographers pursuing them).  Long story short, I couldn't help myself.   I took a lot of photos.  So, if you don't mind, I'll be sharing butterfly pics for the next few posts.  This particular butterfly, according to my notes, is a zebra long wing.  It paused for approximately one millisecond on this golden flower in a hanging basket before taking off.  I wish the butterfly's head was a bit more in focus, but overall  --- mmheh ---- I'll take it.
Posted by SRQ at 12:05 AM 8 comments 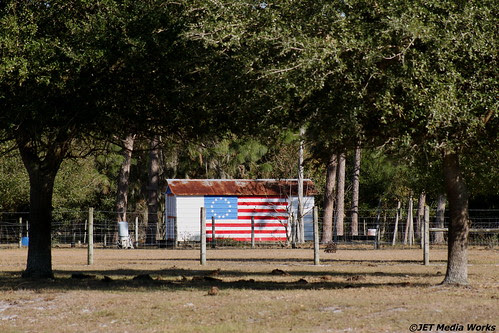 My Junior Editor and I spent quite a bit of time researching Presidents' Day -- and learned some very interesting information. (I remember as a youngster honoring George Washington and Abraham Lincoln's individual birthdays in school, so I wondered what prompted the change to "Presidents' Day".)  First, I cannot tell a lie, this is a bit confusing.  But, the bottom line is this:  there is no federal "Presidents' Day".  The official federal name is "Washington's Birthday".  The birth of George Washington, the first president of the United States, has been recognized as a federal holiday since 1885.  In 1971, the federal observance was shifted to the third Monday in February.  It was not named Presidents' Day, instead it remained Washington's Birthday.  The intent of the date change was to continue to honor the life and legacy of Washington, while providing a long weekend for federal employees.  Subsequently, some states and localities have created their own name for the holiday, with some opting for Presidents' Day.  Some states, like the State of Florida, opt not to recognize it.  All state offices here are open today.  To see the federal holiday calendar, with an explanation about George Washington's Birthday, visit the U.S. Office of Personnel Management.

Now, with that somewhat confusing history lesson behind us, let's discuss today's photo. Several weeks ago, I encountered this adorable tin roof barn in rural Sarasota County.  I figured, with that wonderful colonial flag, I'd hold this photo until Independence Day...until I remembered George Washington's Birthday.  And...voila!  God bless America.  Thank you Washington!
Posted by SRQ at 11:43 AM 6 comments 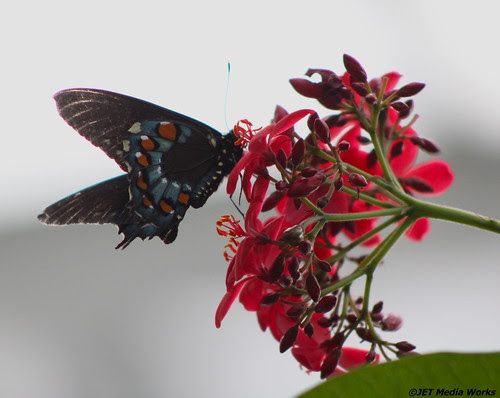 I've been wanting to visit Butterfly Estates in downtown Ft. Myers for at least a year. I finally made it yesterday and it was worth the wait! Oodles of pretty butterflies were flitting around the conservatory: swallowtails, longwings, atalas (and whatever else was listed on the guide sheet). Wow...those little creatures are fast! It was a great challenge trying to get one in frame, let alone in focus. Admission is good for the entire day, so you can leave the warm conservatory, cool off, and return (which I did). After diligently taking detailed notes about the various species I thought I had captured, I'm at a loss as to the exact identity of the butterfly in this photo. I'm 90% sure it's a black swallowtail (possibly a juvenile with those orange spots).  Anyway, this one was kind enough to land for a split second for this photo opp.   See the bright blue dot which appears to be suspended over its head -- that's part of its antennae.   So cool!
Posted by SRQ at 9:29 AM 10 comments 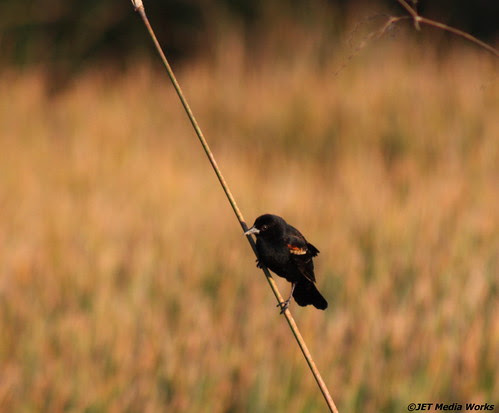 I stalked several red wing blackbirds at the celery fields recently in hopes of capturing a photo to show you that, yes indeed, they do have red on their wing.  Ta-dah!  The red is quite noticeable when they're in flight, but capturing such a photo proved to be elusive on this venture.  I was just happy this guy remained still long enough for me to get this picture.
Posted by SRQ at 12:03 AM 11 comments 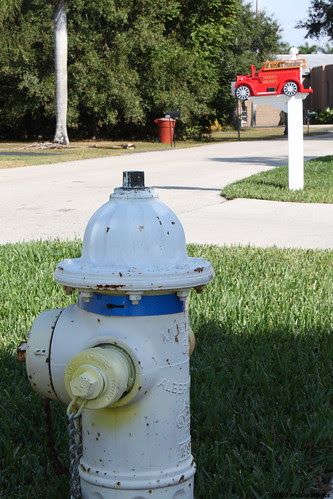 Sure, almost anyone can have a fire hydrant in front of their house.  But, what about a fire truck mailbox to go with it?   Clever, indeed!  I wonder if a firefighter lives here....
Posted by SRQ at 12:04 AM 5 comments 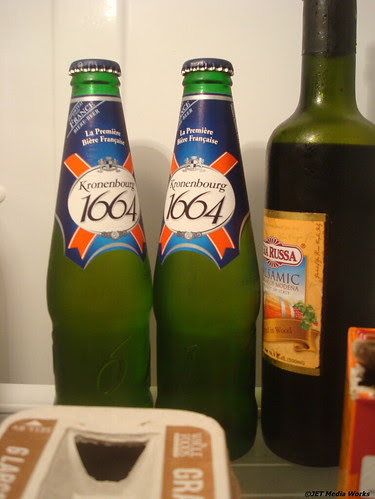 We're back! SDP was unexpectedly shut down for the past week due to an external hard drive malfunction.   During that time, my entire digital photo library was MIA. (That's 17,000+ pictures!) Well, I  located them (not in my refrigerator) but on my backup drive...and I successfully recovered them.  Whew!  Two nicely chilled 1664s have been tucked way in the back of the fridge, ready for the photo recovery celebration.  But, since I started enjoying an alcohol-free diet before this nerve wracking incident, they shall stay put for awhile.  Gosh, it's nice to have all my photos accounted for --- and SDP up and running again.
Posted by SRQ at 8:49 PM 9 comments 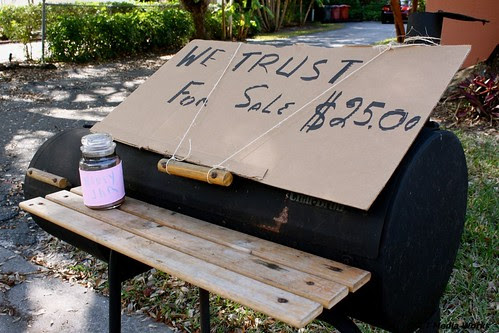 If you were hoping to unload this thing (which appears to be some sort of a cooking device, perhaps a smoker or barbeque), would you leave it by the side of the road with a sign declaring "WE TRUST" and asking $25 for it.... 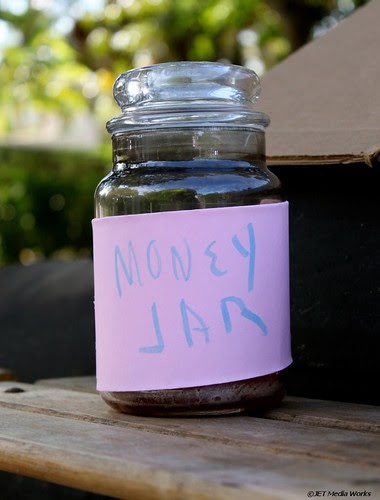 ...with a clearly labeled money jar in which to place said cash?  I spotted this over the weekend while taking a walk in a neighborhood in Ft. Myers. I was so fascinated, I returned several hours later to see if either the smoker or the jar were still there.  (They were...thus, the photos.)  This leaves me with so many questions to ponder:  Who does something like this nowadays when neighborhood crime watches are being organized here due to....theft?  Did someone buy it?  If so, did they deposit $25 in the MONEY JAR and just leave it in plain view on the sidewalk ...or did they knock on the front door and personally deliver the cash?  Or was this a sociological experiment to see how people would respond to the situation?  So many questions....so little time!
Posted by SRQ at 12:02 AM 10 comments

Sure, I could have posted a bird, a dog or an alligator...or some other critter for today's City Daily Photo theme day. But, I'm opting for a completely different take.  I give you the tennis animal:  Novak Djokovic, the #1 ranked player in the world.  With last Sunday's record breaking Australian Open win, prowling the court for nearly 6 hours of mind boggling endurance tennis, he was....well...an animal out there!  Unbelievably impressive.  I've been fortunate enough to see him play several times, including on Centre Court at Wimbledon, where I took this photo.  Lots of bloggers in the CDP community are participating in today's theme day.   Click here to view thumbnails for all participants
Posted by SRQ at 6:23 AM 10 comments