On The Road: Delicate Arch 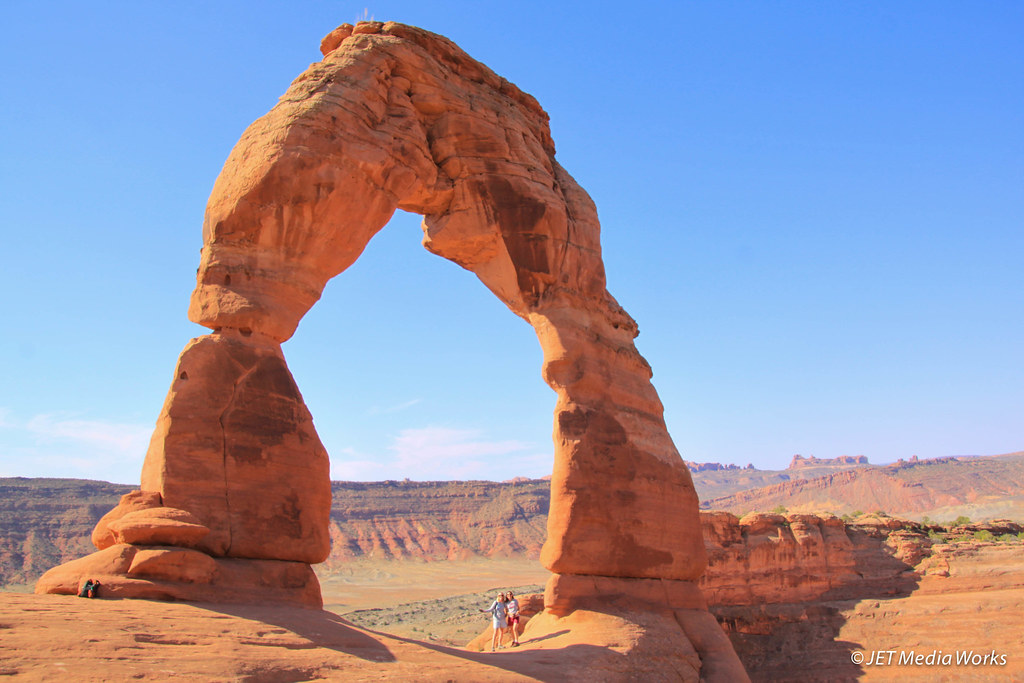 Probably the most well known image associated with Arches National Park is Delicate Arch.  Standing 64 feet tall and 34 feet wide, it's the largest of the 2,000+ natural sandstone arches in the park. (Look how small the Junior Editor and I look standing beneath it!) To get to the arch, you have to be willing to hike in the direct sun for 1.5 miles over slick rock and climb almost 500 feet.  The views are wonderful and the destination sublime -- well worth it!
Posted by SRQ at 9:03 AM 10 comments

On The Road: Arches National Park 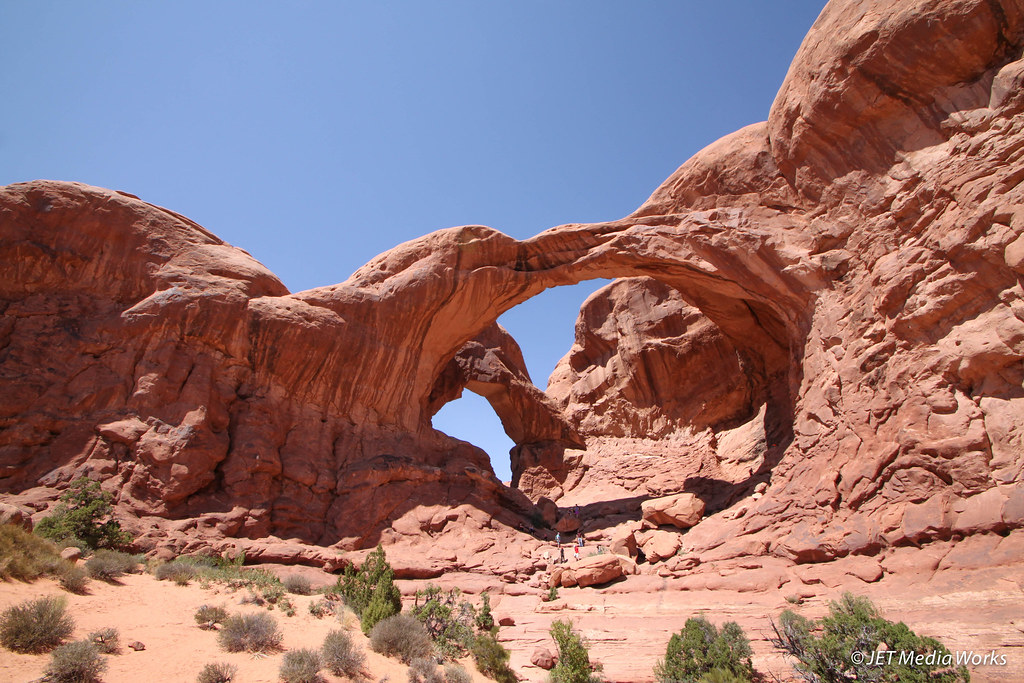 The first stop on the Wild, Wild West Whirlwind Tour was Arches National Park in Moab, Utah. What a unique and beautiful area! Believe it or not, there are over 2,000 (yep, 2K) natural sandstone arches in the park. Some are big. Some are smaller (a park ranger said a span must measure at least 3 feet to be officially designated as an arch).  And, what's amazing...is that they all formed naturally, the result of millions of years of erosion. 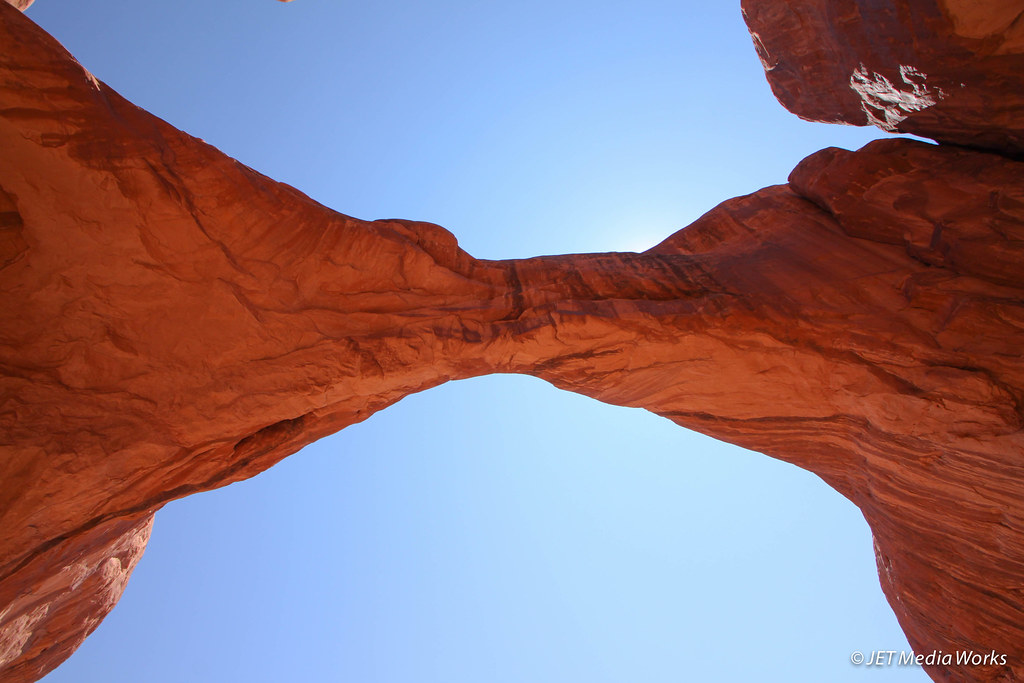 This is a portion of Double arch -- one of my favorites of all the arches we visited.  (The first photo shows why it's called Double arch.)  I love that you can walk around, under, and in some cases, through the arches, if you're daring enough to try.  It was just a 5 minute walk to reach this one.  (Other hikes can take hours.)  And, even though other tourists were there, it's such a large space it felt like we had it to ourselves. 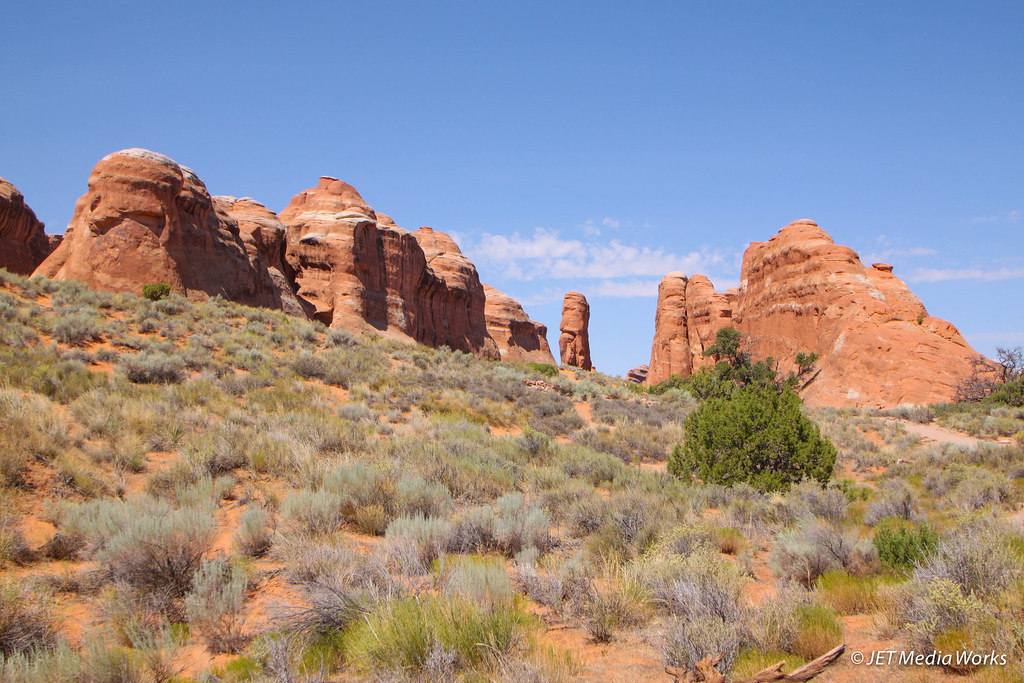 Hiking along Devil's Garden trail, the landscape is filled with spires, towers and amazing sandstone formations.  (Nonstop photo opps!)  It gets extremely hot in Moab and we were fortunate it was only in the high 80s/low 90s (F) during our rigorous outings.  More later on the hiking at Arches!
Posted by SRQ at 11:01 AM 5 comments

On The Road: San Antonio - The Alamo 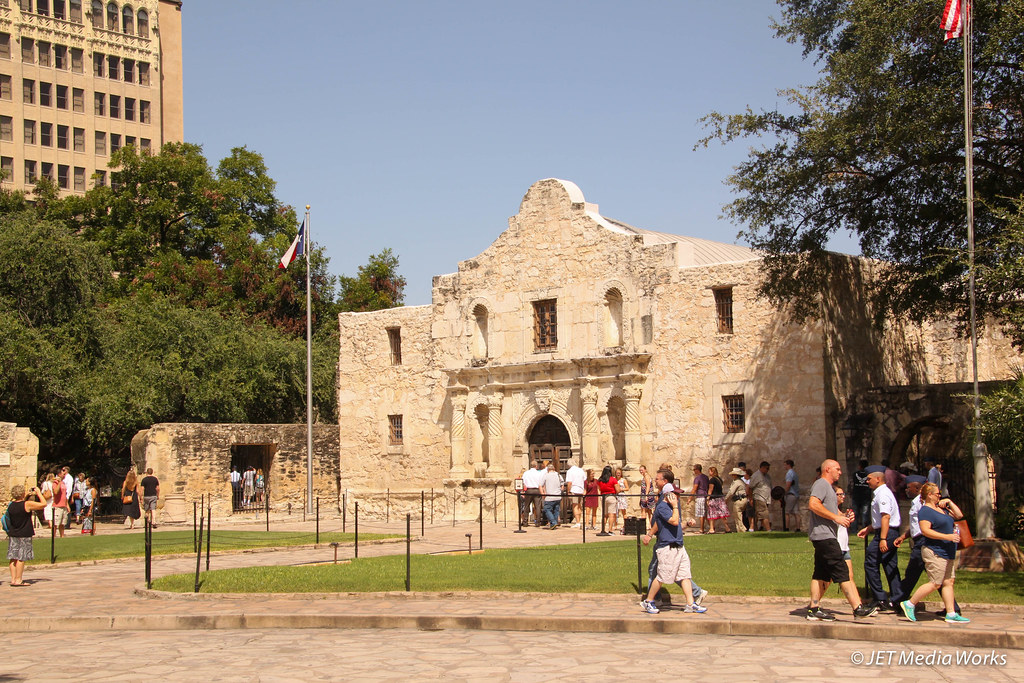 A short stroll from the River Walk, you'll find the historic Alamo tucked in a busy part of San Antonio. This structure, Mission San Antonio de Valero, a Franciscan mission, is most widely identified with the Alamo. The entire site encompasses about four acres and is free and open to the public. And, we listened in on a brief lecture about the history of how Texas was settled, the brutal loss of life at the Alamo, and how Texas ultimately joined the United States -- all very interesting!

In the 1820s, Stephen Austin brought American settlers to Texas (then owned by Mexico and known as Texican) where they could purchase land for 12 cents an acre interest-free for 6 years with three caveats:  (1) They had to become a Mexican citizen; (2) They had to learn Spanish; (3) They they had to have a good reputation and character.  After awhile, the Mexican government became concerned about what was going on so far away in Texas.  The settlers were becoming too independent and they wanted to invoke the American judicial system to resolve legal disputes.  Ultimately, a war for independence from Mexico began.  In 1836, Mexican forces (historians place estimates at a staggering number: between 1,800 and 6,000 soldiers) attacked the Alamo, which was defended by just 200 Texas volunteers. Amazingly, the Texans defended the Alamo for 13 days before being overwhelmed and just a few were spared. The survivors were ordered to tell other Texans they would suffer a similar fate if they continued to revolt. Two months later, Sam Houston led an attack on Mexican troops in San Jacinto declaring "Remember the Alamo!", which led to Mexico withdrawing and nine years later the U.S. annexing Texas. 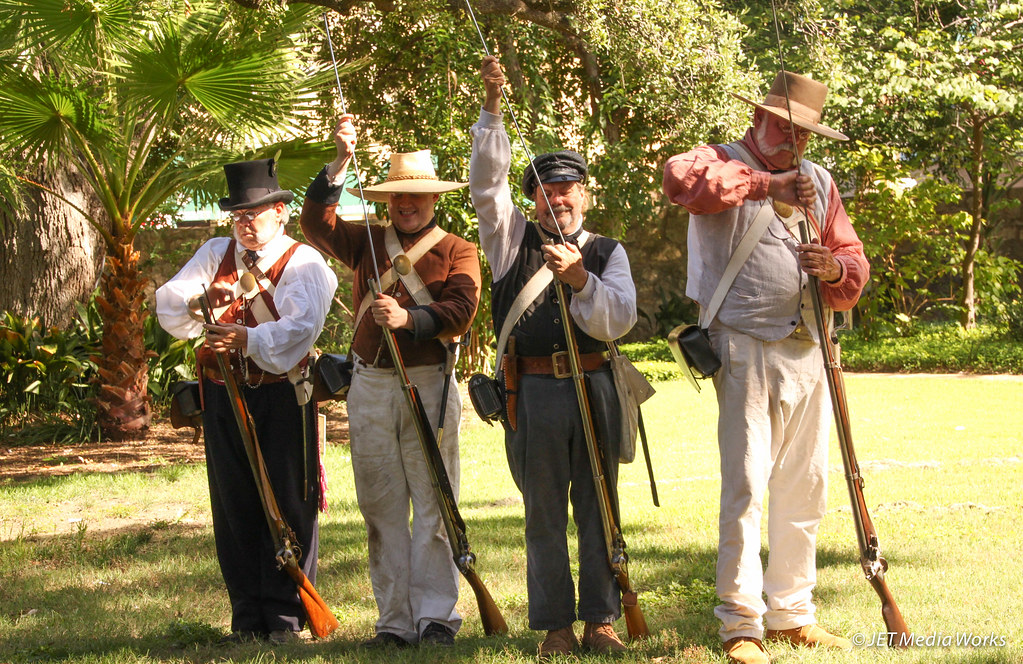 Some Alamo history buffs were on the grounds in period attire demonstrating how the men defending the Alamo would have loaded their rifles.  As I recall, they were expected to go through all the motions and be ready to fire in just 20 seconds.  In addition to being strong willed and tenacious, the Texans must have been well trained to hold the Alamo for nearly 14 days.  Remember the Alamo!
Posted by SRQ at 1:01 PM 6 comments

Labels: On The Road, San Antonio 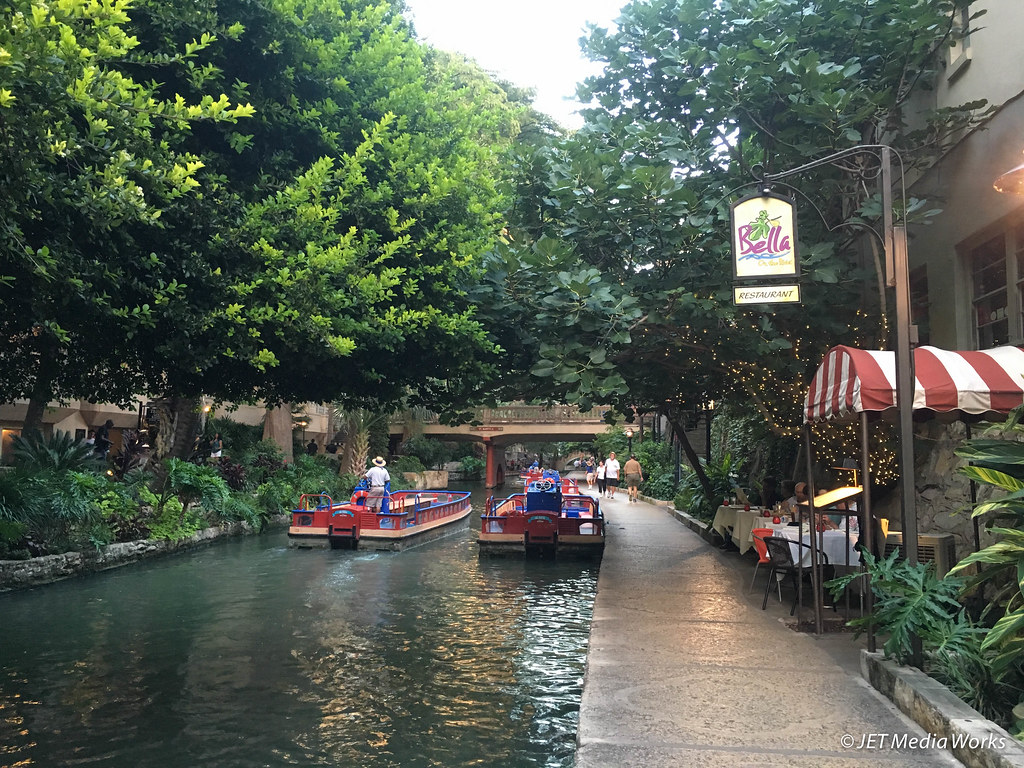 When visiting San Antonio, strolling the River Walk is a must!  It's approximately 1.5 miles long and runs along the San Antonio River with oodles of quaint cafes and retail shops just feet away.  I snapped this pic with my iPhone my first evening in town. 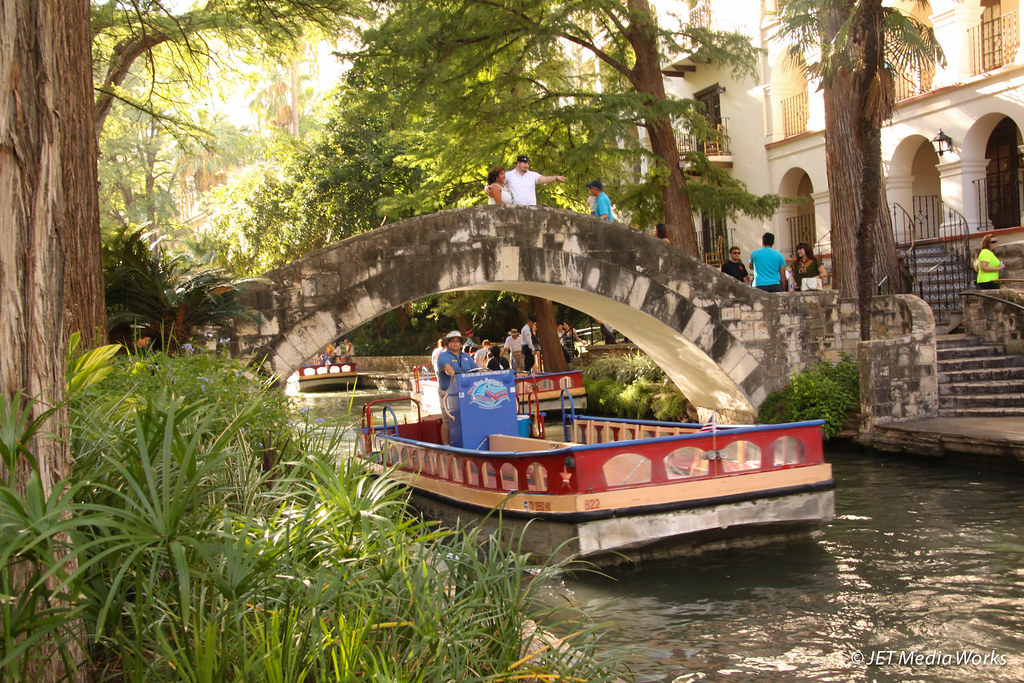 Can you say 'charming'?!  Arched pedestrian bridges connect the two banks and various tourist attractions.  It's quite enjoyable -- and very active in the evenings with hundreds of people strolling, the sound of live music wafting from cantinas, and diners enjoying a drink or meal at a cafe while watching the boats putter by.  We took a relaxing riverboat tour under the stars with the guide telling us about the history of San Antonio -- fun!  I had visited San Antonio 15 years ago when I was a TV reporter and was dispatched to Texas to cover a federal trial -- and the only thing I had a chance to see outside the courtroom was the River Walk briefly one night after a 11 hour work day.  I hoped it was going to be as nice as I remembered and it was. Definitely worth checking out!
Posted by SRQ at 11:19 AM 10 comments

Labels: On The Road, San Antonio

On The Road - San Antonio: The Saga 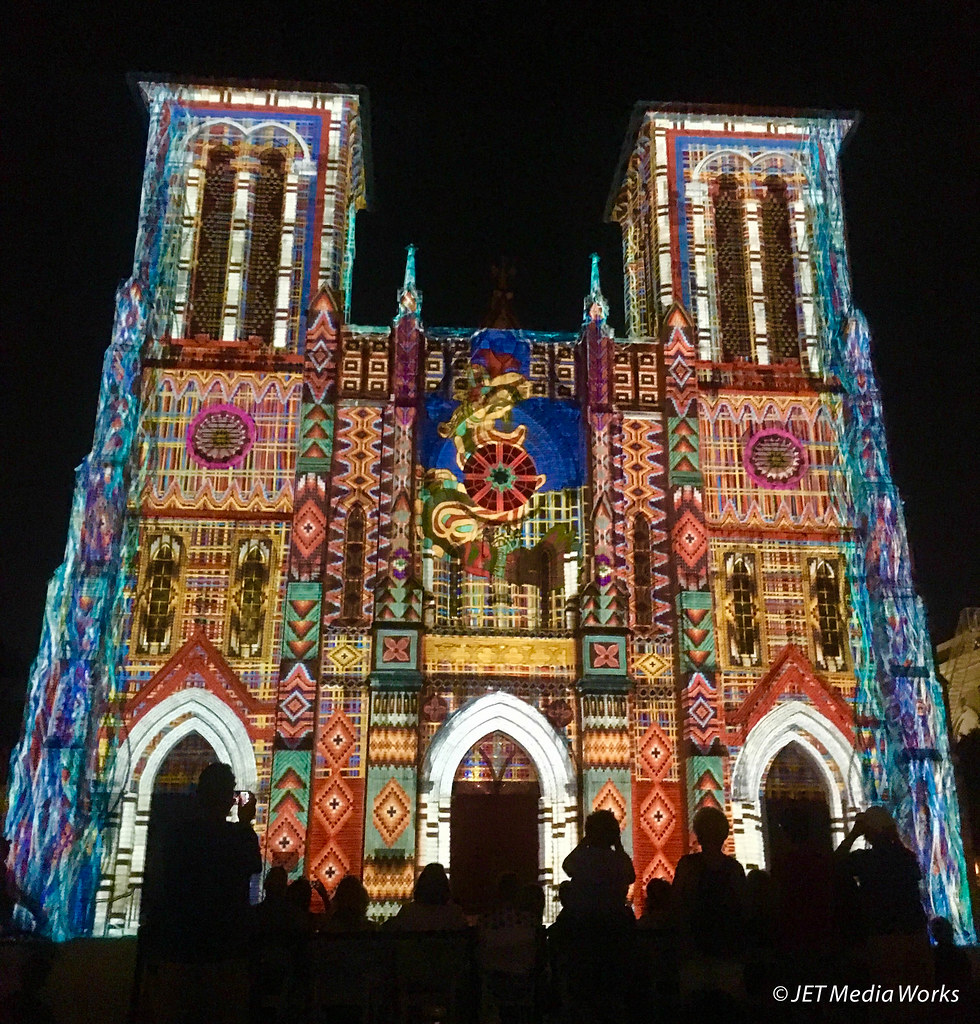 The SDP staff has returned from its Wild, Wild West tour of four national parks, plus a brief stop in San Antonio, Texas!  For the most part, SDP posts have always been limited to Florida; however, with such picturesque adventures to share, the Editor in Chief has waived that rule (to the immense delight of the entire staff.)  So, anticipate a steady diet of "On The Road" photos for awhile!

While visiting San Antonio earlier this month for a conference, the hotel concierge recommended I check out something called "San Antonio: The Saga".  It's an art installation of sorts that you have to see and experience in person, but here's a brief explanation:  The history of San Antonio is told through a colorful video light show that is displayed on the facade of San Fernando Cathedral, one of the oldest cathedrals in the U.S.  The show starts at the beginning of time, goes through the Alamo, and concludes with San Antonio today -- a bustling, diverse and prosperous city.  (This photo was taken with my iPhone, believe it or not.)  The idea originated two years ago as a way to attract visitors to the area -- and it has worked!  The exhibit is free and lots of people attend the showings.  Designed by artist Xavier de Richmond, it's very creative -- one of the most amazing video displays I've seen.  Only music is used -- no narration -- for the entire 20 minute program.  As I mentioned, you really need to see it in person, but here's a video I found on YouTube.   Hope everyone has been doing well in the Blogosphere!  I look forward to catching up with you soon.
Posted by SRQ at 5:48 PM 7 comments