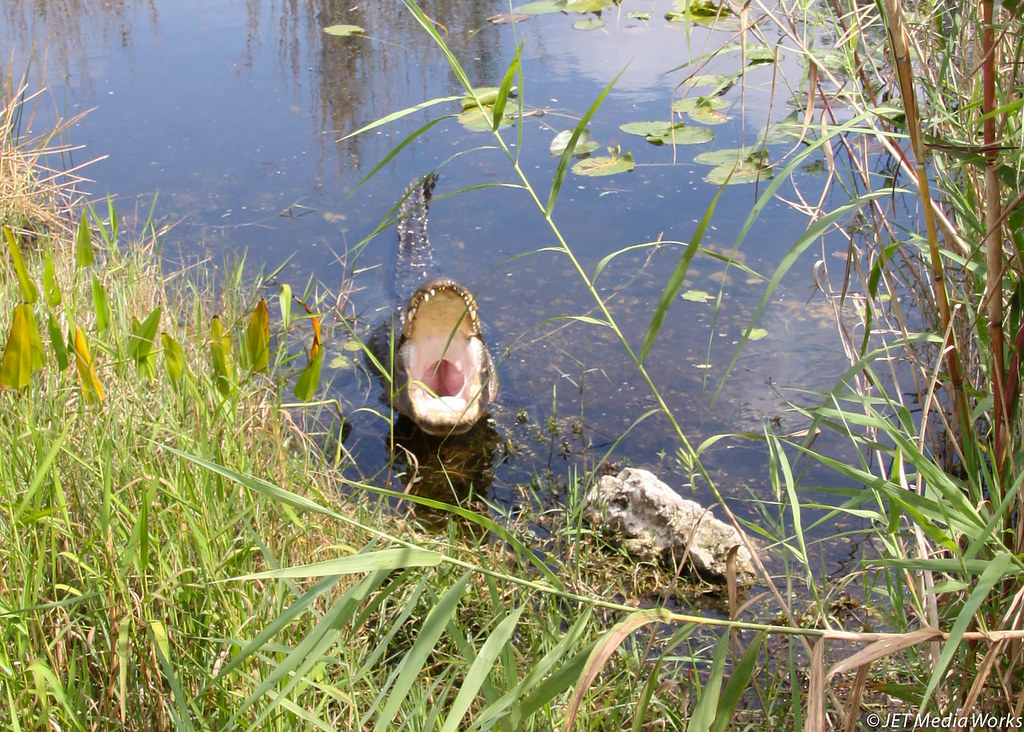 Well, since Everglades National Park is synonymous with alligators, we'll start the highlights of our recent trip there with what can only be described as a "Show off Gator".  This guy really wanted us to see his incredibly large (and pristinely clean looking) maw.  So, how did we get to this point? 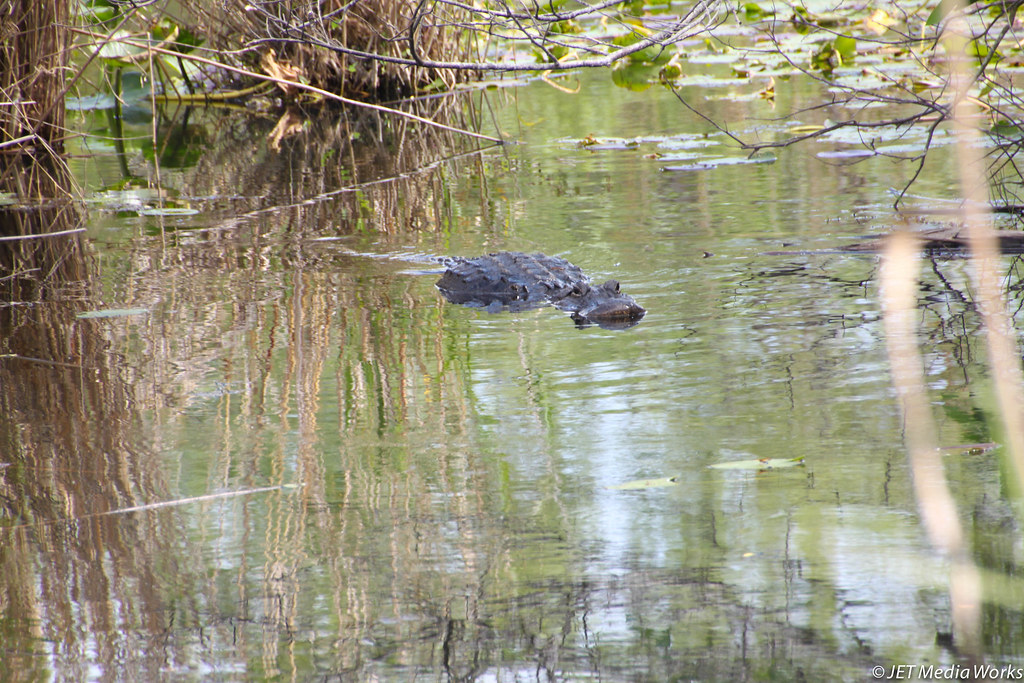 Well, we were hiking the Anhinga Trail, a very popular walk in the Everglades. At the end of a boardwalk, we paused to take in the beautiful scenery when this guy spotted me immediately. (Note I say me…not the SDP Jr. Editor who was present and accounted for on this adventure.  I suspect I may have been viewed as a smaller, more manageable snack….but, who knows?!)  For whatever reason, the gator made a beeline toward me as you can see in this video.

Although there was decent bit of separation between us (and I was elevated on a boardwalk), there's something a bit unnerving about an  imposing beast like this staring you down and swimming straight for you. It didn't even wait to get on land before exposing it's massive white/pink mouth, teeth and all.  Naturally, I was looking down at my camera at the time -- and almost missed the entire "gaping maw scene" which happened very quickly. Fortunately, the SDP Jr. Editor was on her game and alerted me: "It's mouth is OPEN!" 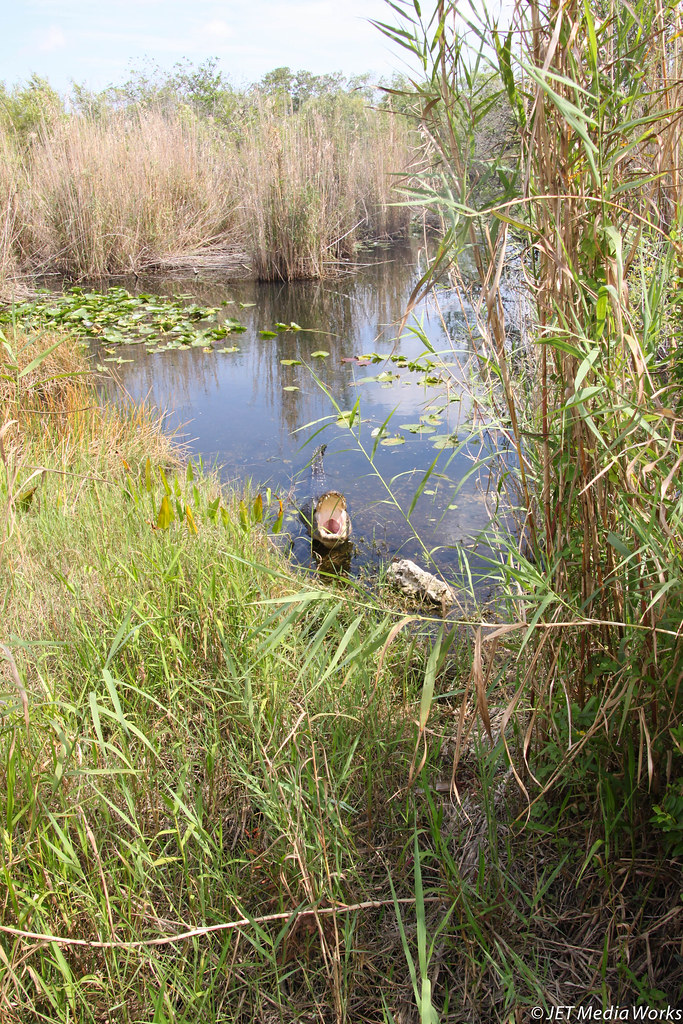 This is what it looked like without my long lens -- and no cropping.  Welcome to the Everglades!  It's perfect timing that we're sharing these photos, because it's National Park Week in the U.S.  Although I've lived in Florida for almost 18 years, this was my first visit to Everglade National Park and I really enjoyed it.  We'll be sharing more from this wonderfully wild and swampy area soon.
Posted by SRQ at 5:47 PM 9 comments

One last post from the Miami Open before we move on to other topics.  Some players are more fun to photograph than others because of their expressiveness on the court.  This year my favorite player to shoot was Angelique Kerber, the 2016 Australian Open champion from Germany.  This was first time I saw her play in person and she didn't disappoint. Whether she was unleashing a forehead from the baseline… 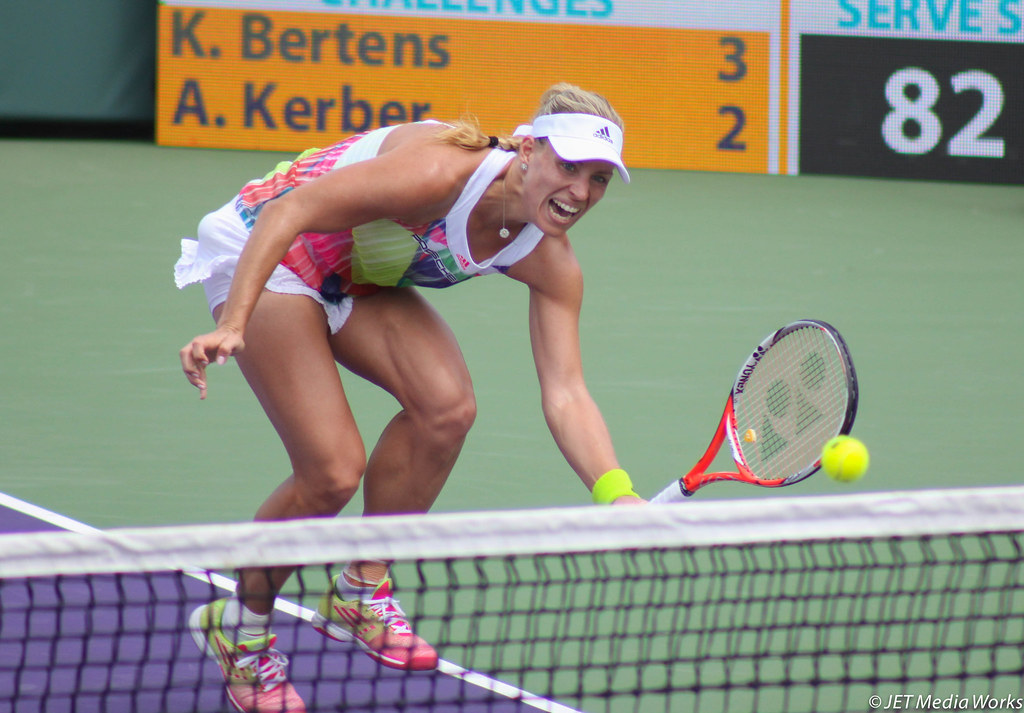 …or prowling at net -- she was all business and it showed!

How would you like to face that intensity just a few feet away? ((gulp))

"Come on," Angie yelped after winning a point when she was down a set to a relatively unknown Dutch player in the seering Miami heat.

After she stormed back to secure the victory, Kerber's intense on-court demeanor was tucked away and she happily paused for photos and autographs with fans.  What a champ!  From what I'm hearing, the Miami Open will remain on Key Biscayne for at least one more year -- great news!  Next up on SDP:  highlights from the entire staff's big adventure to Everglades National Park. Hope everyone is doing well in the blogosphere!
Posted by SRQ at 3:47 PM 8 comments 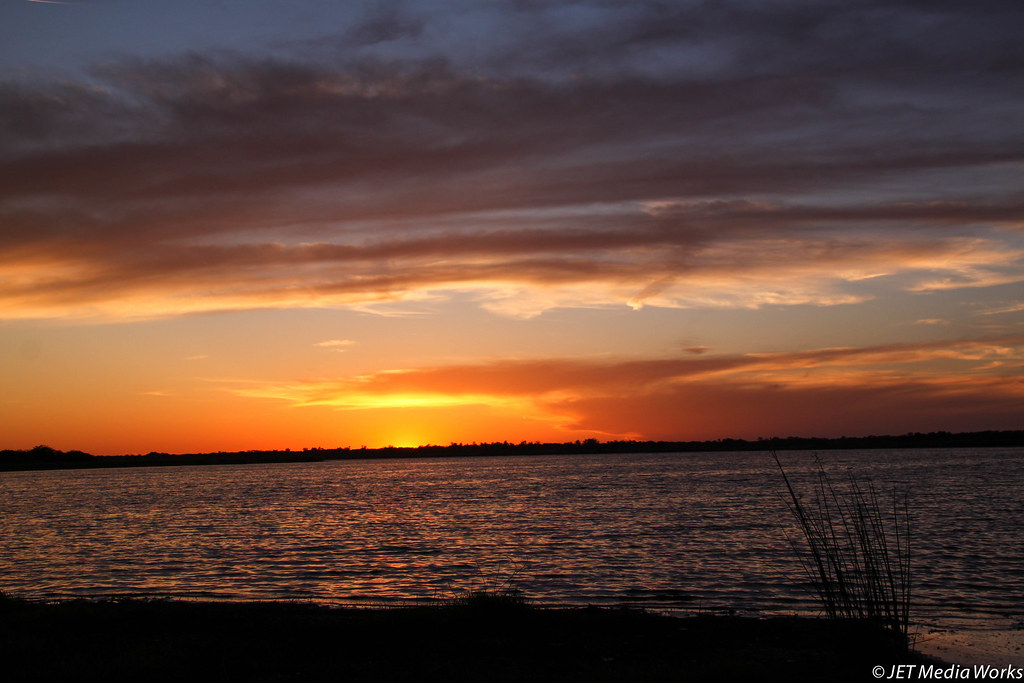 Spring is lasting a bit longer than usual here in Sarasota -- yes!   We're still enjoying beautiful days with fairly low humidity which translates into cooler evenings and remarkable sunsets.  The entire SDP staff just returned home to Sarasota and we were able to catch up enough with housekeeping matters etc. yesterday to make it out to Myakka River State Park for this nice sunset.   A surprising number and variety of birds were out -- which the entire SPD team is looking forward to sharing at some point.  So, where were we….? 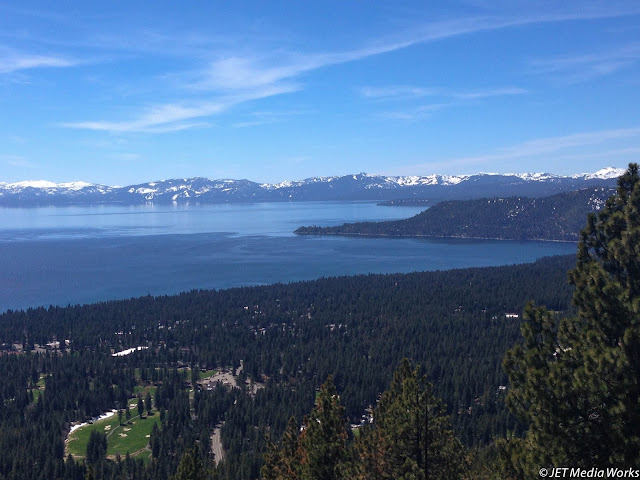 Nevada!  This was my view earlier in the week.  I was in Reno for a few days and was fortunate enough to have a few hours to explore nearby Lake Tahoe.  All I can say is … wow!  What a gorgeous part of the country -- very pretty with the tall pine trees and snow capped mountains (I even spotted quite a few people sledding, cross country skiing and downhill skiing). I definitely would like to return to explore some more one day.  Which  leads to the question:  swamp or mountains?  Actually, I love both!  Each has its own unique environment and natural beauty.  As long as I can be outdoors exploring, I'd be happy as a clam.  Hope everyone is doing well in the blogosphere!
Posted by SRQ at 12:20 PM 5 comments

If possible, I like to see Marcos Baghdatis play in person.  "Baggy" hasn't experienced a big breakthrough on the ATP circuit, but I've always appreciated his easy going demeanor and infectious smile -- although his smile was tucked away during this match. 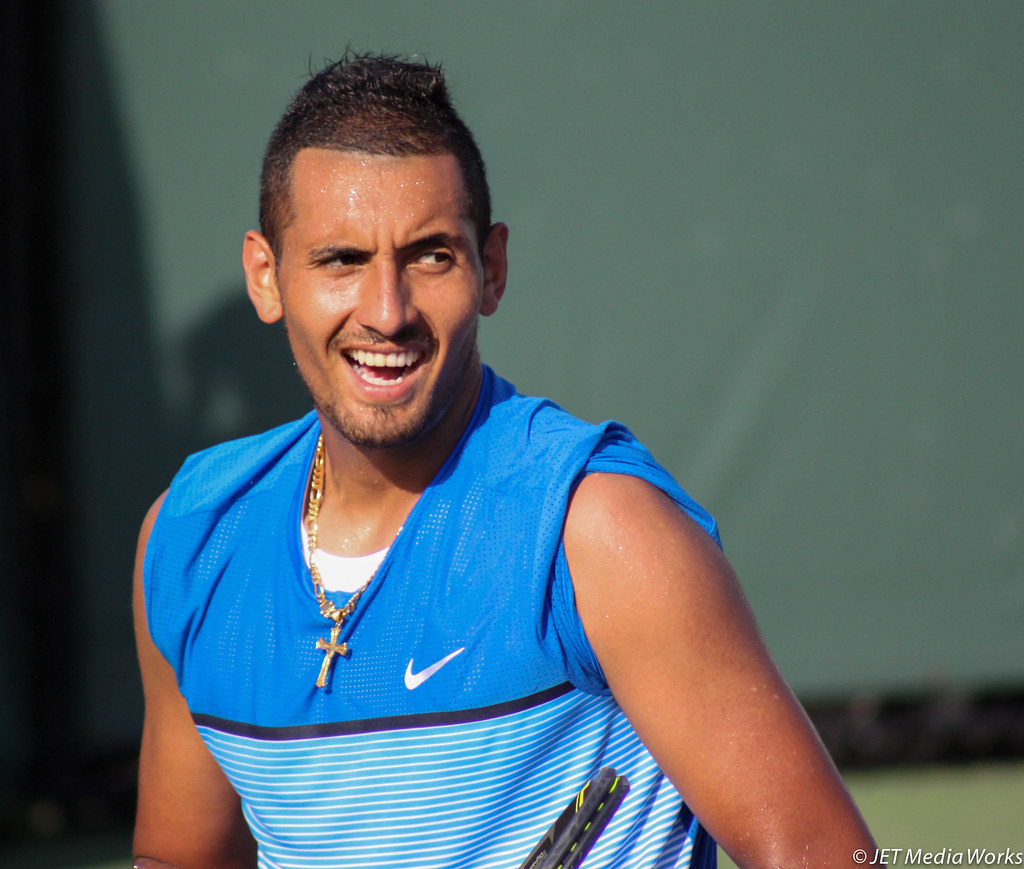 It could be because he was being pushed around the court by this young up and comer, Nick Kyrgios, from Australia.  This photo, I think, captures Kyrgios' demeanor on the court.  While I wouldn't call him a modern day tennis "bad boy", the word "flamboyant" is used frequently by tennis announcers to describe him and his non-traditional style. I would also add the words "edgy" and "intense".

Kyrgios sailed to a straight sets victory.  Not sure what was said at the net when Baggy gave Kyrgios a congratulatory pat on the chest, but Kyrgios -- who's 10 years younger than Baggy -- seemed to appreciate it.  Kyriogos is currently ranked #20 and, ultimately, lost in the quarterfinals at the Miami Open.  The entire SDP staff will be on sabbatical for a bit.  We'll be back soon.  In the meantime, have a nice week!
Posted by SRQ at 12:03 AM 2 comments

Swiss player Stan Wawrinka is ranked #4 on the world tour and is known on the circuit as "The Stanimal".  I love that nickname!  He has a nice one-handed backhanded, which he was getting ready to unleash when I snapped this shot. Unfortunately, though, it wasn't his day on the grandstand court at the Miami Open.

It was especially hot (even by Miami standards), and The Stanimal looked overheated and tired. He quickly found himself down a set and a break to #51 Andrey Kuznetsov…and looking for answers (and perhaps shade) in his towel.

Kuznetsov pulled off the upset in straight sets -- possibly the biggest victory of his career. And, he pleasantly basked in the limelight taking his time to autograph every tennis ball and hat put in front of him following the match.

And, even though perspiration was dripping down his face, Kuznetsov was happy to pose for selfies. Very polite, nice young man.  I hope his success on the courts continues!
Posted by SRQ at 12:03 AM 2 comments

For the 10th straight year, I made the journey down to Key Biscayne in Miami for the men's and women's professional tennis tournament. We caught parts of 13 matches in two days. Whew! We kicked things off watching this guy -- Milos Raonic.  A Canadian, he's currently ranked #12 in the ATP standings.  He's tall for a tennis player (6'5") and a bit quirky, which makes it interesting to watch him in person.  He's the one who now wears a compression arm sleeve as a security blanket and, amazingly, his hair always stays in position.  Milos also has a tendency to stick his tongue out when he's concentrating.  (Gosh…I hope he doesn't inadvertently bite down on it when he's chasing a ball.) 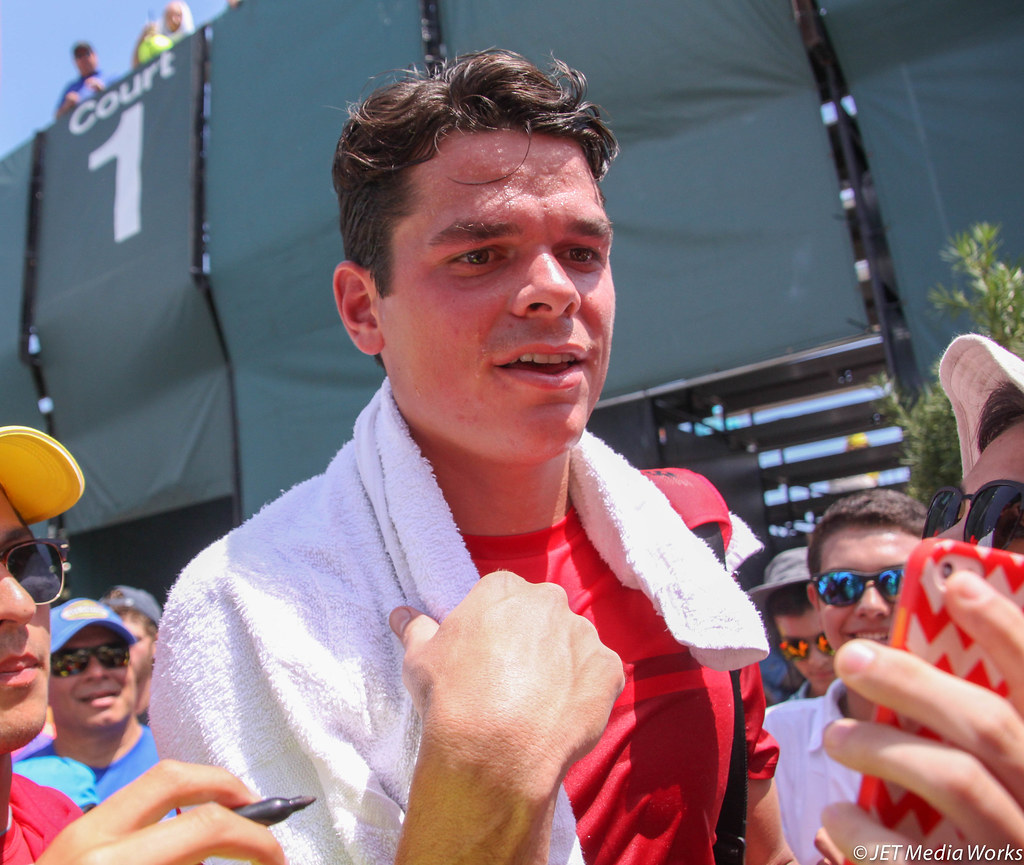 One my favorite things about this tournament is the proximity to the players. I snapped this shot of Milos just minutes after he defeated American Denis Kudla on Court #1. The crowd of fans was tight, and security personnel were moving people aside.  But, I made myself big and stood my ground when I saw Milos was coming right toward me. He was nice and paused just long enough for a couple of selfies with fans and signed a few autographs.

Over the past several years, the tournament has struggled with an identity crisis, undergoing several name changes, and is now known as the Miami Open.  Now, a big controversy is swirling and word is...this may have been the last year for the tournament on Key Biscayne. It will be sad if that ends up being the case.  One way or the other, it's been a good run!  More pics to come.
Posted by SRQ at 10:40 AM 4 comments 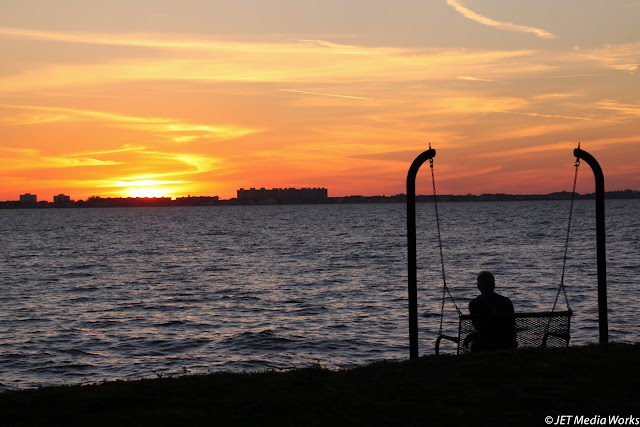 It's theme day in the City Daily Photo blogosphere.  And, this month's theme is 'The Beauty of Simplicity'.  When I took this photo at Whitaker Gateway Park near downtown Sarasota, I knew it would be my theme day submission.  A lone person sitting on a swing watching the sun sink over Sarasota Bay -- simplicity at its best!  The intent of this theme day may have been to challenge photographers to simplify their composition and zero in on one subject.  That being said, I like this interpretation.  : )  To see other interpretations of theme day click here.  Happy Friday!
Posted by SRQ at 12:04 AM 14 comments