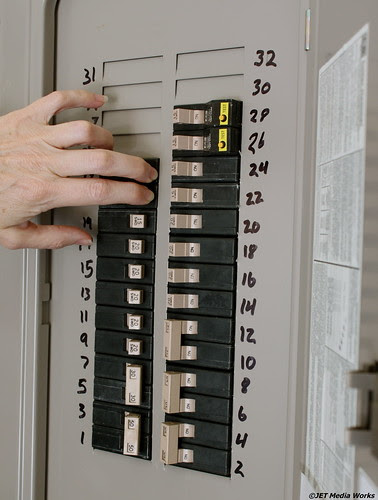 SDP Headquarters is shutting down for awhile.  Rather than returning 'new and improved', staff has every intention of returning just the same!  See you around July 4th.
Posted by SRQ at 10:45 AM 8 comments 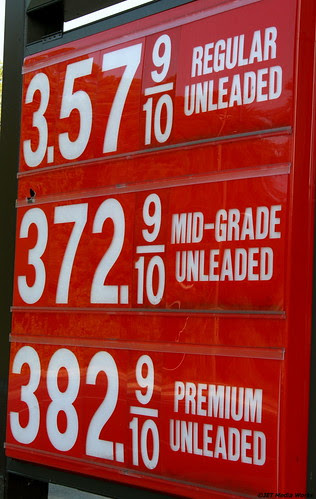 As you know, I've been taking a photo of gas prices once a month for the past few months at the same gas station in Sarasota. My what a difference one month makes! Since May, the price has has dropped 32 cents. One day it plummeted 18 cents in four hours! This particular gas station never hit $4.00, but came very close at $3.98, which was fortunate for me (and my co-workers) because I had vowed to bicycle to work when it hit the $4/gallon mark. Let's hope this trend continues. Stay tuned!
Posted by SRQ at 8:44 AM 8 comments

There's lots of talk in Sarasota about increasing multi-modal transportation....like biking and walking.
Posted by SRQ at 7:42 AM 10 comments 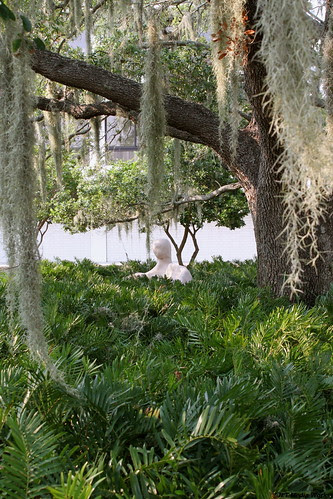 The city of Sarasota has an extensive public art collection, including this ceramic clay piece, created by Jack Cartlidge in 1983, which sits outside City Hall. This one is called 'Earth Mother' and has always captured my attention since it gives the illusion of an oversized human reposing in the midst of this greenery and spanish moss. Cartlidge passed away several years ago and was well known in Sarasota, having created 20 percent of the city's public art collection. To learn more about public art in Sarasota click here.
Posted by SRQ at 12:01 AM 7 comments 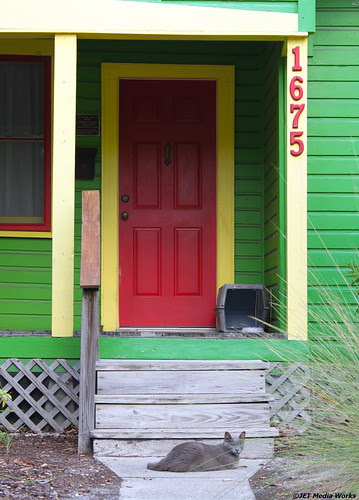 The bright colors prompted me to pause for a moment during a neighborhood walk and take in this doorway. And that's when I noticed the smokey feline peering through the vegetation protecting the area like a tropical jungle cat. I'm still not sure what to make of it all. Especially when you toss the cat carrier into the mix.
Posted by SRQ at 12:03 AM 9 comments 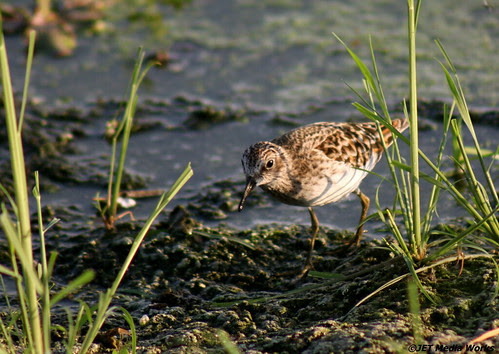 It took a bit of chasing, but I finally got a shot of this little fellow scooting around the celery fields in rural Sarasota County. After studying my 'Birds of Florida' field guide, I've decided it's a Least Sandpiper --- not a Western Sandpiper. The primary difference (to me) is that the Least Sandpiper has 'dull yellow legs', according to the guide, while the Western has black legs. Of course, there's a chance it's a Semipalmated Sandpiper, a Lesser Yellowlegs or a Sanderling. Ugh! So many shorebirds with so many similarities! For now, I'm calling it a Least Sandpiper. Anyone know for sure???
Posted by SRQ at 12:04 AM 8 comments 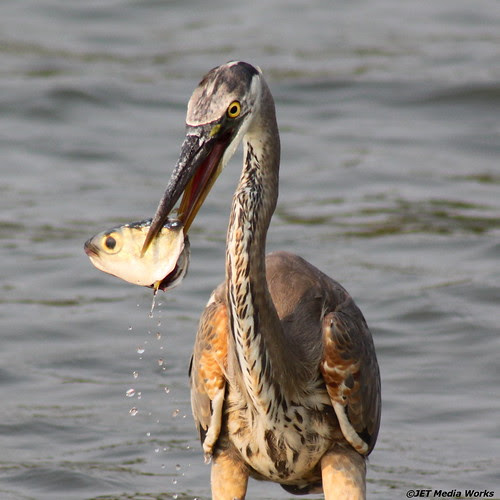 I encountered this great blue heron fishing near the Siesta Key bridge and I was rather perplexed when it caught this fish sans body. After a few minutes of watching the bird (which seemed equally perplexed and aware that something was missing), I realized some nearby fishermen probably had chopped off the heads of their catch and tossed them in the bay. He seemed to want a whole fish --- and a live one that would put up a bit of a fight --- because over the course of the next 15 minutes, it couldn't decide what to do: eat it...or leave it? Time and time again, it pulled the head out of the water, shook it, and walked around with it, only to drop it back in the water with an air of disappointment. Finally, though, it must have figured the fish head was at least an appetizer and **gulp** down the hatch it went, in one big, disturbing swallow. Wow.
Posted by SRQ at 12:02 AM 14 comments 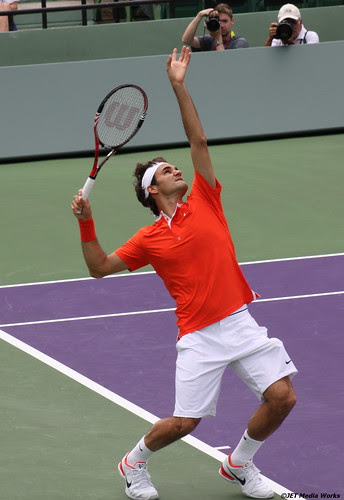 The SDP Headquarters will be shutting down today for the men's final of the French Open. Roger Federer played one heck of a brilliant semi-final match Friday to advance to the finals and attempt to add one more title to his already record breaking 16 grand slam victories. In the process, he denied his opponent Novak Djokovic the world #1 ranking and stopped Djokovic's winning streak at 42. Go Roger! In Rog's way to grand slam title #17 is his arch rival....this man...

...Rafa Nadal. Rafa is attempting to tie Bjorn Borg's amazing record of winning six French Opens. Rafa just turned 25 and as long as his body holds out, is expected to play for at least a few more years. Roger, on the other hand, (I hate to actually write these words), is in the twilight of his career. He turns 30 this summer and has said he will play at least through the 2012 Olympics. Not only is he a top competitor, but a generous philanthropist and a kind spirit. You never hear a bad word about Roger. So, with all that...who knows if we'll see another Roger-Rafa grand slam final ever again? I have two words: GO ROGER! (As an aside, I took both these shots last year on center court during the Sony Ericsson Open on Key Biscayne.)
Posted by SRQ at 12:03 AM 4 comments 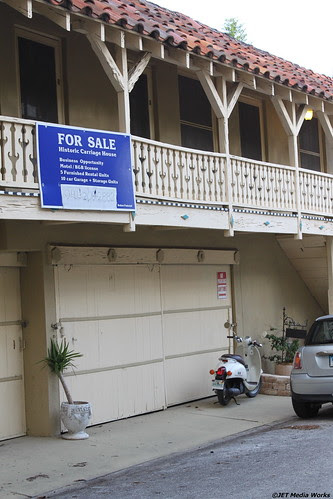 This may not look like Sarasota, but it is. In fact, downtown is just a five minute walk away. The for sale sign describes the property as an historic carriage house with five units and ten car garages -- right in the middle of the Burns Court neighborhood. It's sandwiched between cute old bungalows and tucked behind a high rise condo building. I don't know how old the carriage house is, but it sure feels old if not a bit out of place. I bet it was quite a place, though, back in its day.
Posted by SRQ at 12:04 AM 4 comments 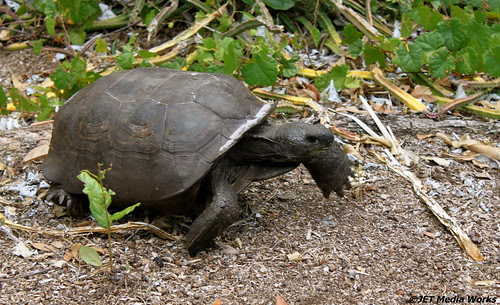 While Cabbage Key, just south of Sarasota, is a small island, it's full of wildlife --- much to my delight! This fellow is a gopher tortoise. They've been on North America for 60 million years, making it one of the oldest species in existence. Because they burrow, their dens become homes for many other animals like skunks, snakes, armadillos, rabbits and others. Rather hospitable, don't you think?

Apparently, the spokes-gecko for Geico Insurance moonlights as a nature trail tour guide on Cabbage Key. He really wanted me to know I was standing next to a gumbo limbo tree. 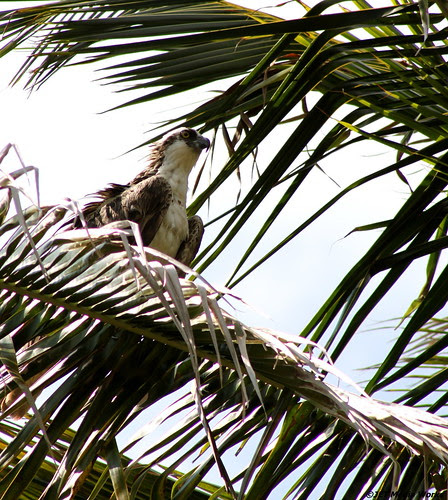 While taking a break from the hustle and bustle of island life and playing a hand of cards, I glanced upward (okay...perhaps I was looking heavenward for answers because inexplicably I was losing) and (voila!) I noticed this osprey perched 15 feet up in a tree staring back at me. Although it was a busy holiday weekend with lots of boaters coming and going, I think I was the only one to spot him. And, he knew that I knew. A few minutes later, he took off. 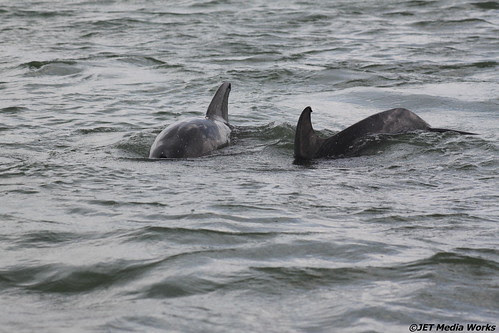 No boat excursion is complete without seeing dolphins, and this trip did not disappoint. A pod of dolphins magically appeared as a late afternoon rain shower rolled in. They weren't easy to photograph! Tom the boat captain was kind of enough to putter around for a few minutes to help me get a good look at 'em, but this was the best I could do. If you ever need a small charter boat, I recommend Tom. He leaves out of Pineland Marina and will pick you up and drop you off when you want without a set schedule, which is really nice for those of us who like to explore without worrying about racing back to a cattle boat after a relaxing day on an island.
Posted by SRQ at 12:02 AM 4 comments 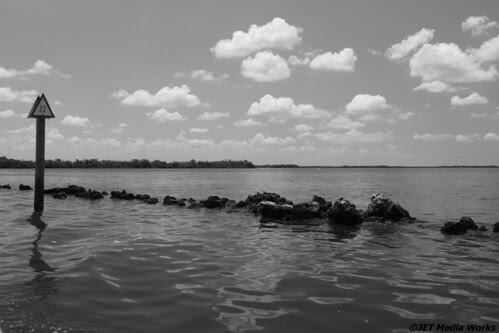 If you continue west along the intercoastal from this point for about 15 minutes, you'll arrive at marker 60: Cabbage Key. You can only get there via boat (or float plane), and it's one of those places you have to experience, especially as a Floridian. And I finally made it there during the long holiday weekend! Cabbage Key (named for the cabbage palm tree, not the vegetable) was established in the 1930's by the family of author and playwright Mary Roberts Rinehart, who may or may not have coined the phrase 'The butler did it'. It's also where Jimmy Buffett may or may not have written "Cheeseburger in Paradise". Besides filled with unconfirmed creative intrigue, Cabbage Key is a teensy island, which includes the following: a handful of cottages, one cozy lodge/restaurant (the bar wallpapered in dollar bills), one wooden water tower and a short nature trail. That's all. It's a great location to just...be. I loved it! So, why black and white for today's pic? It's my attempt at giving a tip of the hat to Clyde Butcher, a still photographer who specializes in black and white in this area of Florida. He's Florida's modern version of Ansel Adams. If you've never seen his incredible work, check it out here. At this writing, I don't have any info to share about what photos Clyde may or may not have taken on Cabbage Key.
Posted by SRQ at 12:02 AM 3 comments 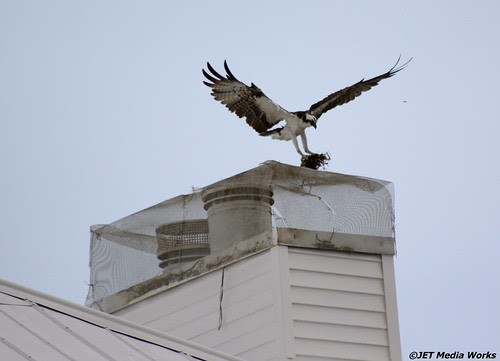 Okay...truth be told, I've been so busy lately, I forgot about Theme Day and it snuck up on me. But, because I wanted to participate, late last night I pondered the subject: construction. I remembered that I snapped this shot this past weekend. It's an osprey landing atop a screened-in area of a tin roof, with brush in her talons. I would dare say she's building a nest --- construction at its best! Click here to view thumbnails for all participants
Posted by SRQ at 6:41 AM 11 comments