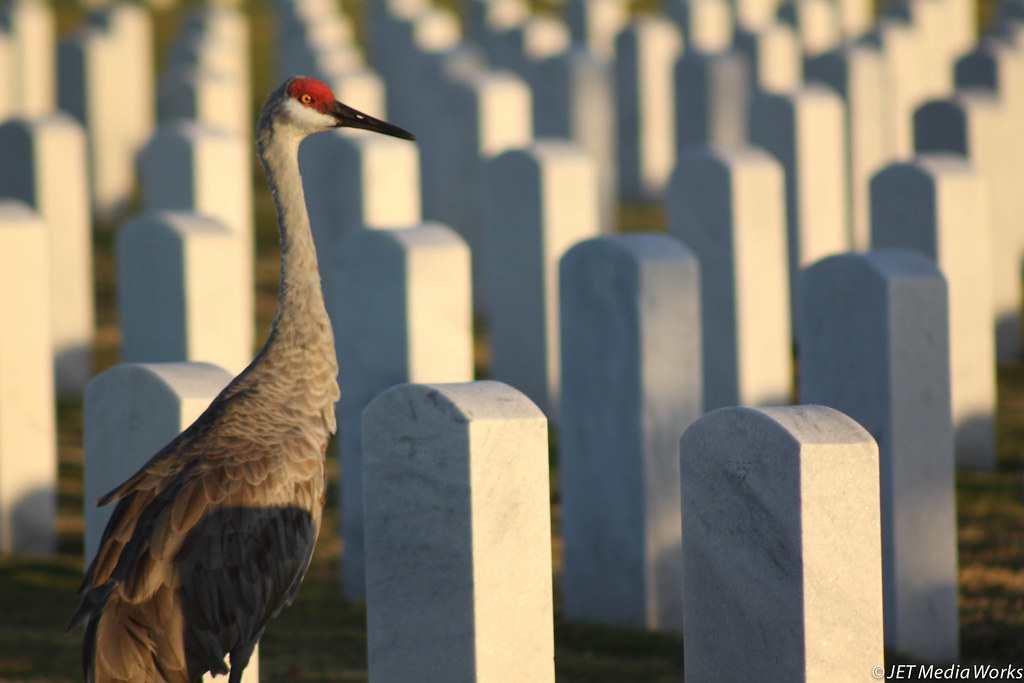 Standing 4 feet high, the sandhill crane is one tall bird.  So, when this one popped its head up, suddenly towering over the rows of tombstones at Sarasota National Cemetery and gazing into the distance, it was a sight to behold. It really looked as though this regal crane was standing sentinel over the many men and women resting here who served our country.  Before I clicked the shutter, I knew this would be my Veterans Day post.  I'll be attending the annual Veterans Day parade today in downtown Sarasota taking in the patriotic scene along Main Street and expressing my appreciation to our military veterans.  If you have the opportunity, I hope you take a moment to thank a veteran for their service and sacrifices.  It's important to remember our freedoms aren't free.
Posted by SRQ at 12:03 AM 10 comments 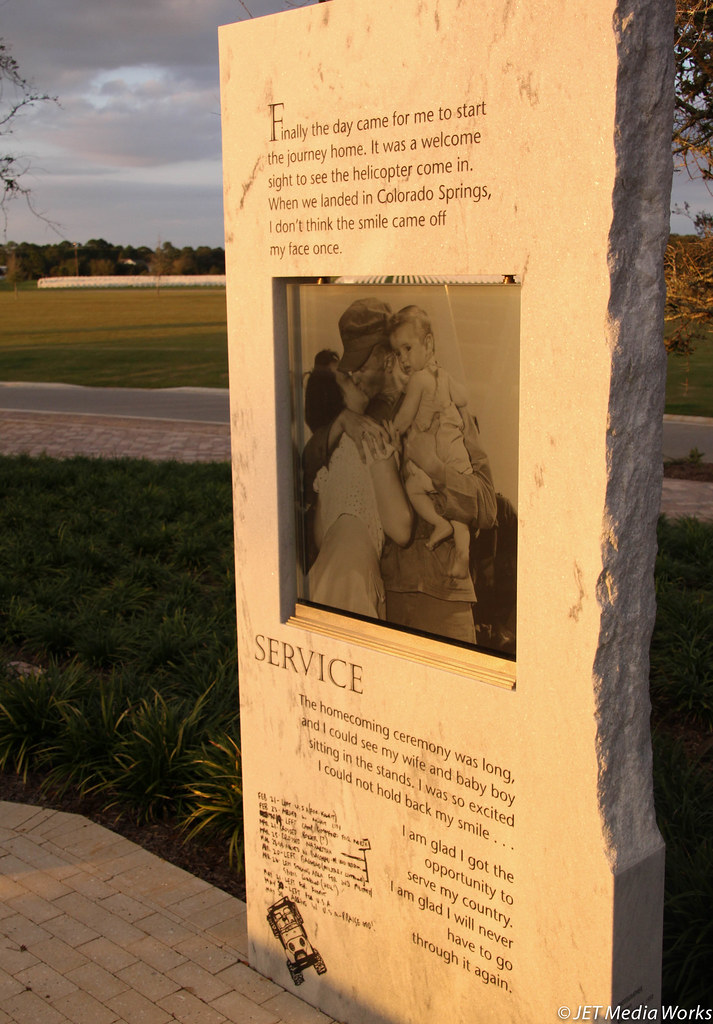 Since Veterans Day is tomorrow, I thought I would visit Sarasota National Cemetery and share some of the incredible artwork honoring our military veterans.  Dozens of photographs dating from the Civil War to present day are on display. Some are affixed on plinths and 16 are actually engraved onto glass on each side of a marble tablet, like this one. Each tells a unique story of service, duty, honor and sacrifice.  This installation shows a serviceman arriving home safely in 1950 to a long awaited reunion with his wife and baby boy. 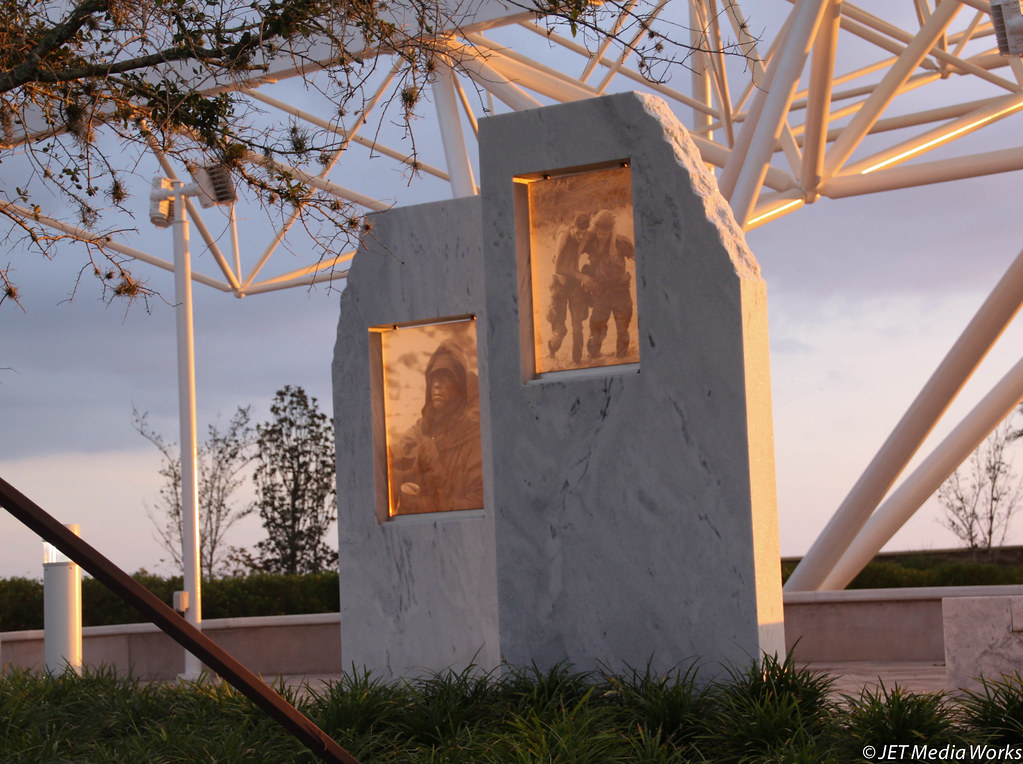 Each piece is perfectly positioned so the golden rays of the setting sun illuminate the image.  Yep -- that's pure natural light shining through the engraved glass.  Pretty incredible.  Of course, with just a few precious minutes of golden light, there's never enough time to properly capture these thought provoking images.  To all our U.S. military personnel present and past:  Thank you for your service!
Posted by SRQ at 12:03 AM 5 comments 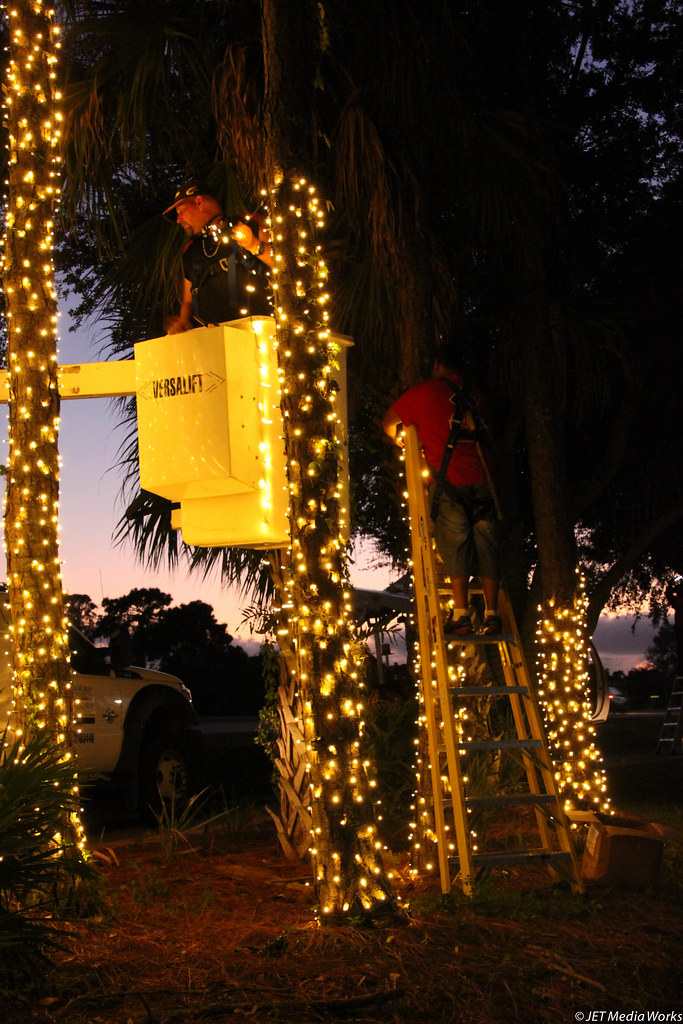 For the past several years I've really been noticing Christmas creep -- retailers creeping up the time of year when they roll out their Christmas sales push.  Step #1, of course, is putting up Christmas decorations, especially the eye catching lights. I  think this is the earliest I've seen commercial decorations going up. 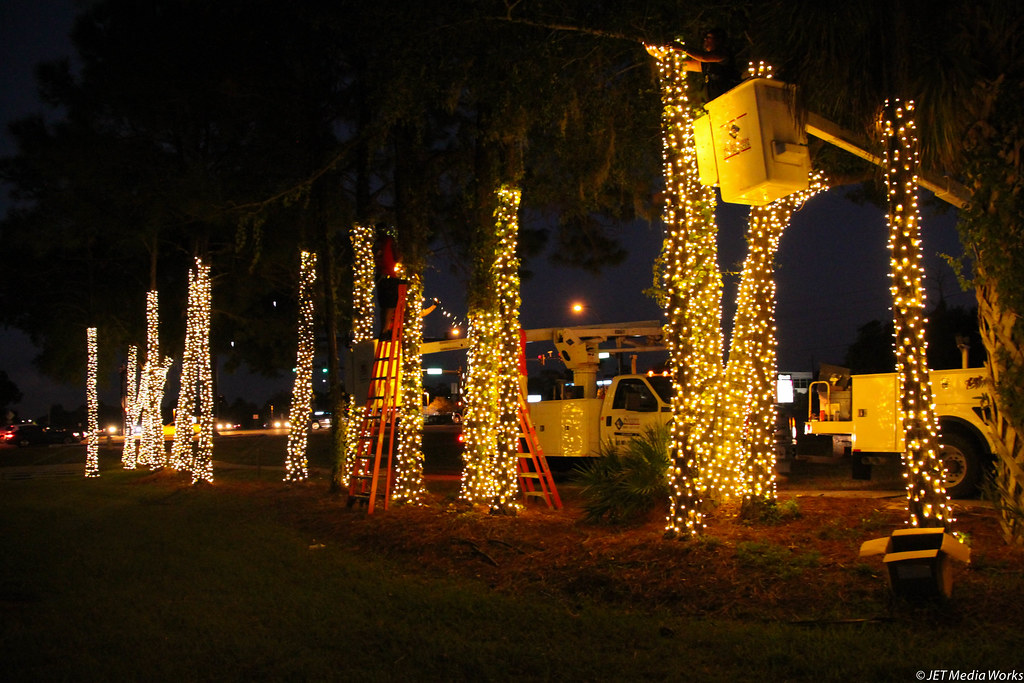 I took these pictures in Sarasota three days before Halloween. A large crew from a company called Christmas Designers was stringing lights in the palm trees along University Parkway, a busy thoroughfare which leads to and from a major shopping mall. 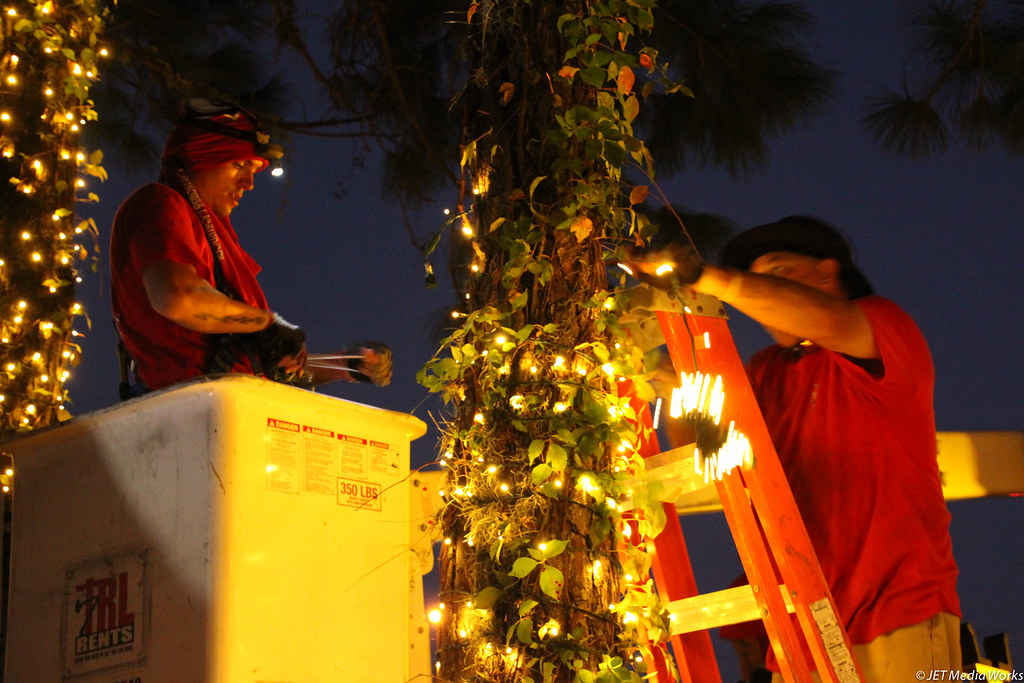 Even with a dozen workers and several bucket trucks on site, I was told it would take more than one day to get everything done. One guy mentioned that dealing with Christmas decorations is a full time job and that's all he does year round.  Imagine that!  They were a very happy, enthusiastic group of workers, getting the job done while having fun.   And, I'll note that the music they had playing was not Christmas-themed -- whew!  (Perhaps we can hold off on that until after Thanksgiving?  Although, yesterday,  I received a notice from Pandora that their Christmas channel is up and running and ready for my listening pleasure.)
Posted by SRQ at 11:51 AM 7 comments 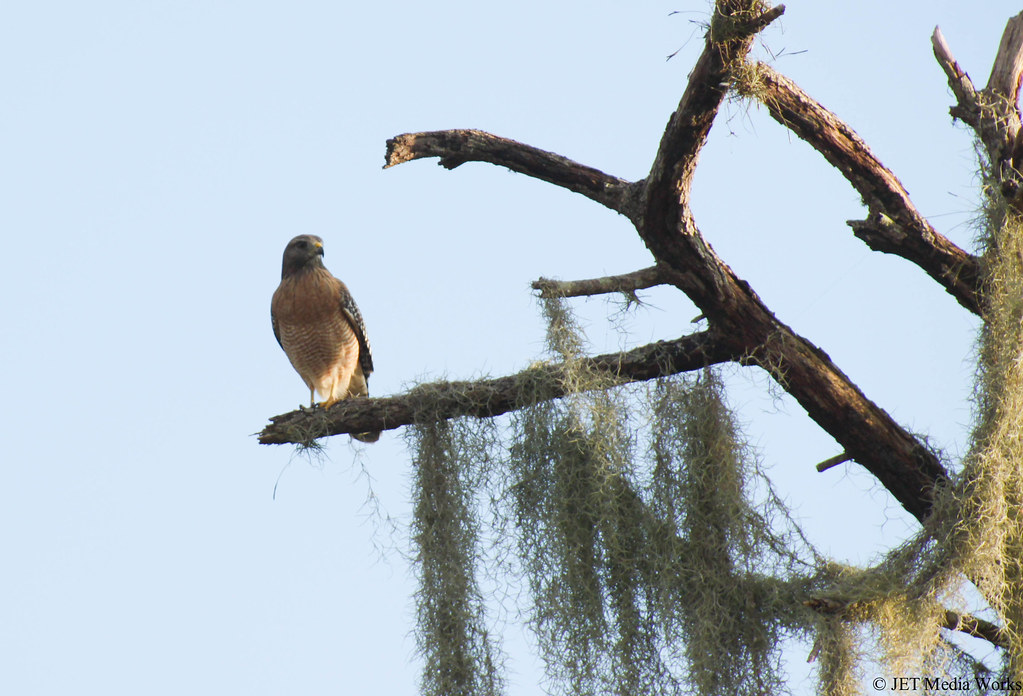 This month's theme day in the City Photo Daily world is 'ephemeral'.  I've had more than my fair share of ephemeral experiences with birds while trying to photograph them in the wild. I offer this experience. Yesterday afternoon (before I was even aware of today's theme day), I encountered a red shouldered hawk roosting on a tree branch at Sarasota National Cemetery (one of my new favorite places for birding -- more on that later).  Not satisfied with the lighting, I thought, 'If I can somehow maneuver to a better location before he flies away…' 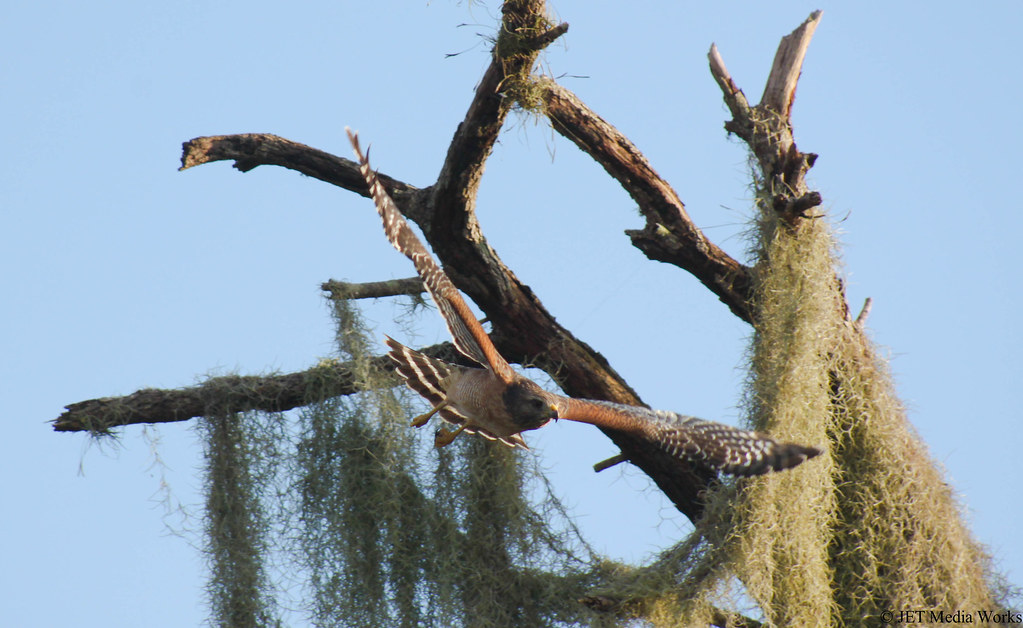 Then -- **whoosh!** -- he was gone!  It happened so quickly, I thought I had completely missed the moment.  To me, birds -- especially birds of prey -- give new meaning to 'ephemeral'.  I think in the medical world, ephemeral is used to describe something that lasts one day.  I can only imagine birds sitting and posing for me for an entire day!  Thanks to my blogger friend Kay at Sequim Daily Photo who suggested this challenging theme day. To see other interpretations click here.
Posted by SRQ at 10:40 AM 13 comments