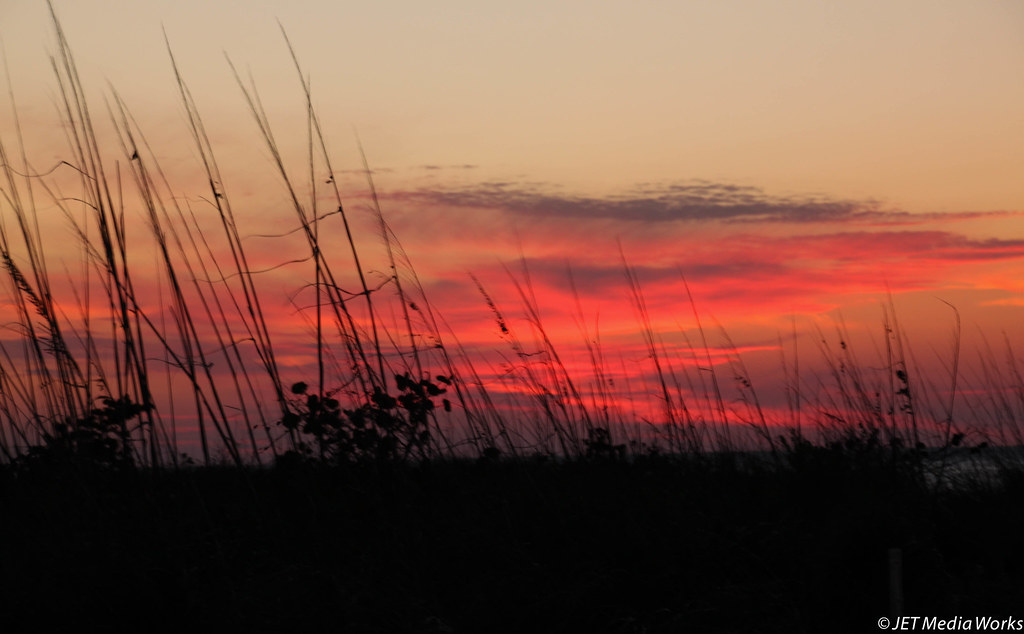 Sundown last night through the sea oats at Lovers Key State Park near Ft. Myers Beach. This is my favorite time of year to photograph sunsets in the Sunshine State. So, consider yourself officially advised that SDP might be glowing with more sunset photos than usual in the coming posts.
Posted by SRQ at 12:04 AM 9 comments

Making of a Sunset 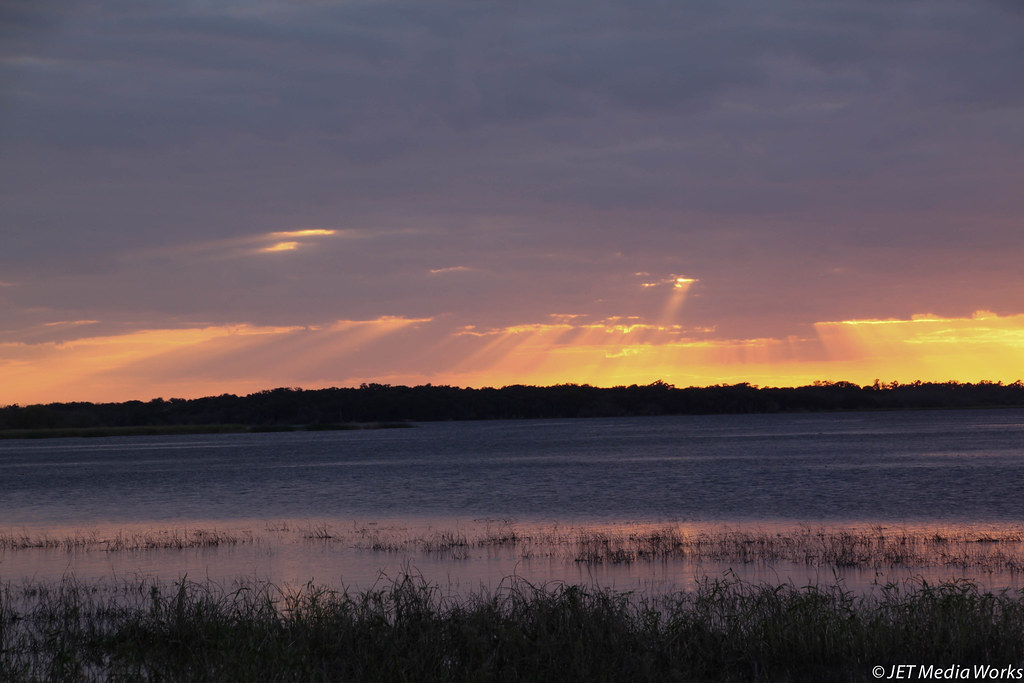 When I first arrived at the bird walk at Myakka River State Park last night, it was overcast and I did not have high hopes for a decent sunset. The crepuscular rays shooting from the clouds interested me and I thought maybe they would become more pronounced. Wrong. 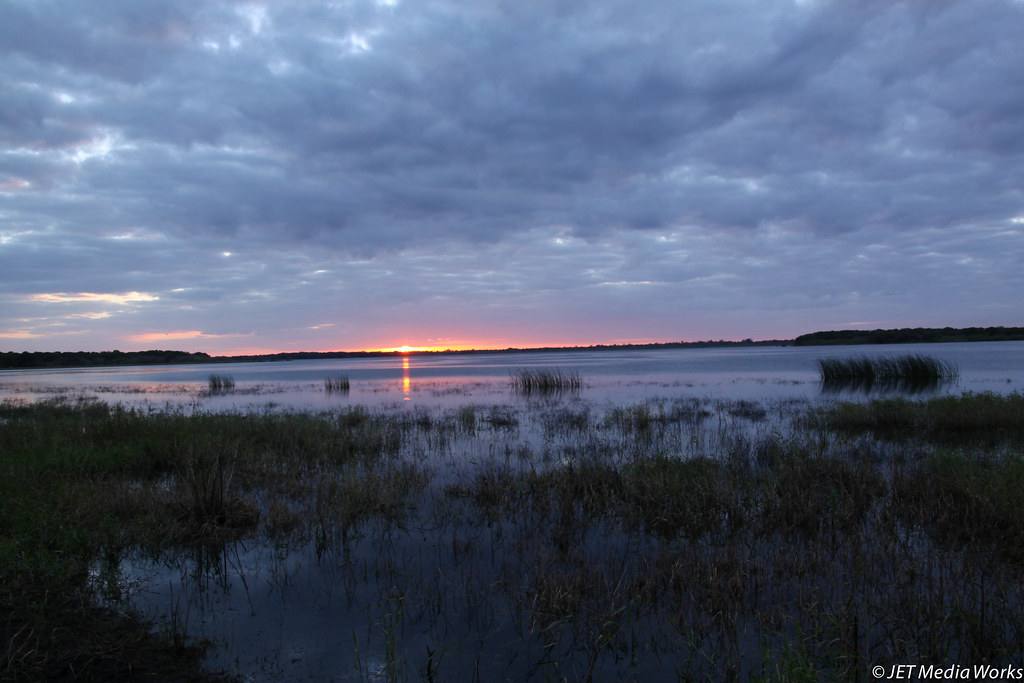 Within a few minutes, the rays disappeared.  But, then…the smallest pinprick of tangerine appeared in the clouds.  And began to grow…. 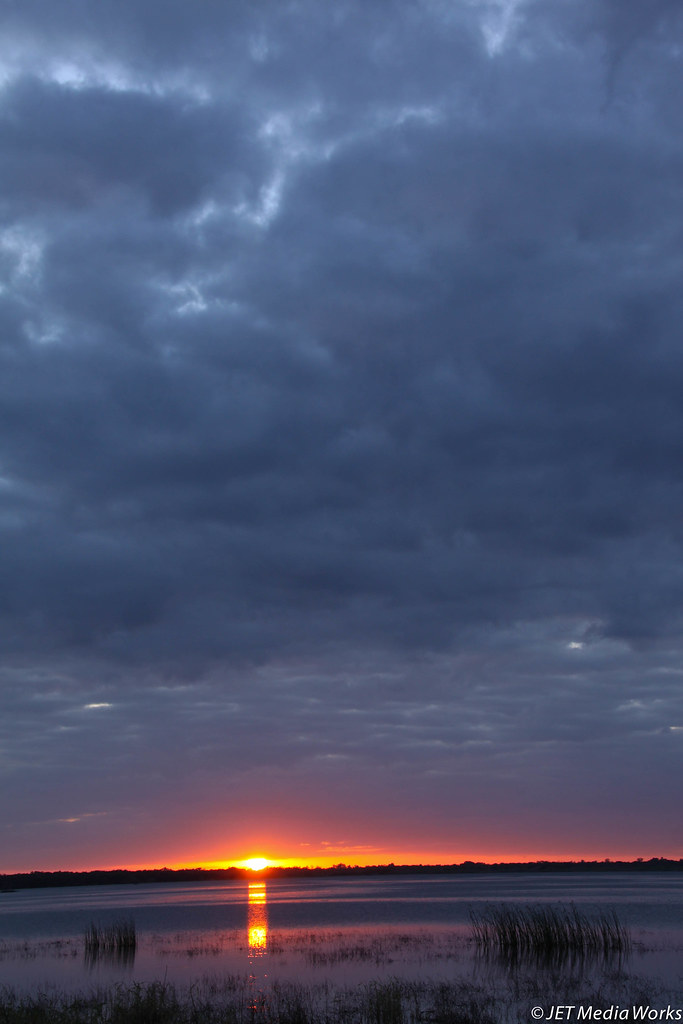 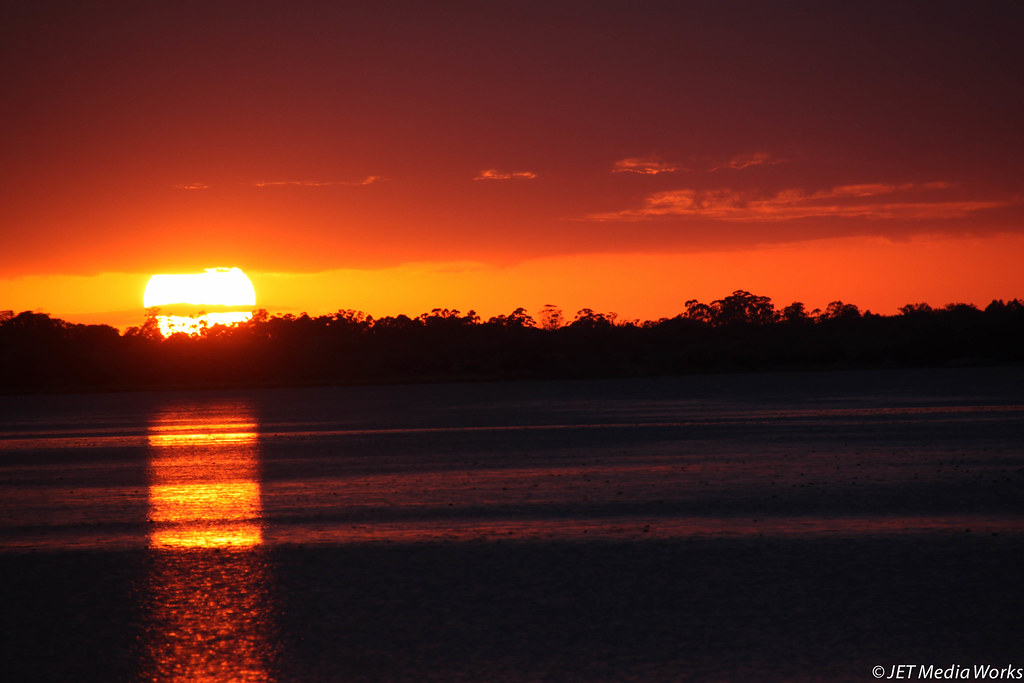 …and just like that...a pinprick of tangerine burst into a big flaming ball of orange and red.  Wow! 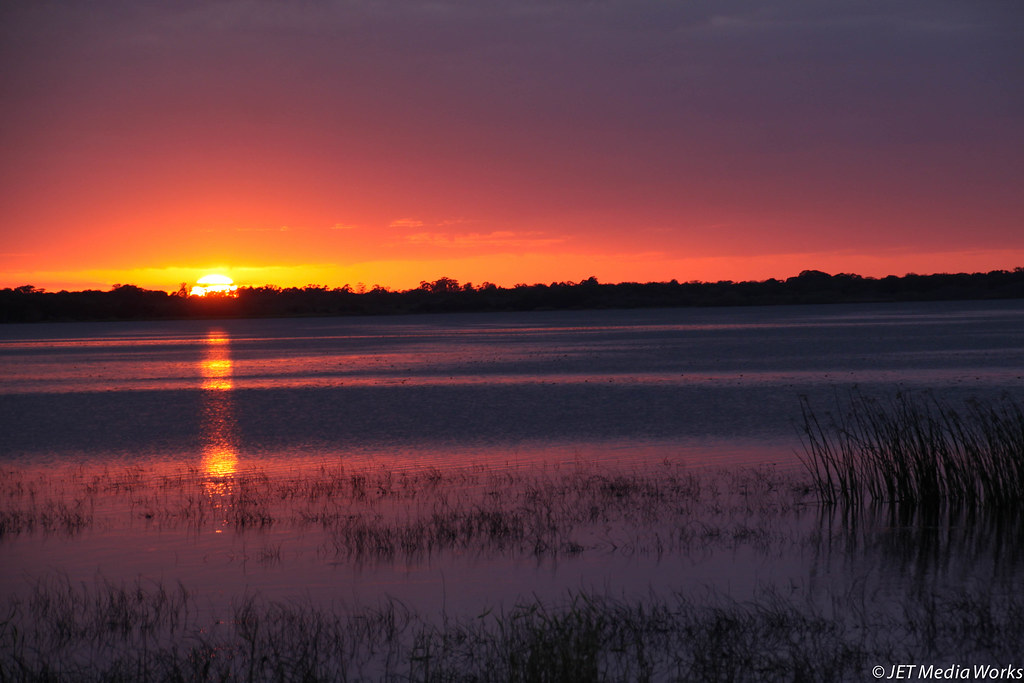 As the sun sank, a brief transition to salmon and lavender began. 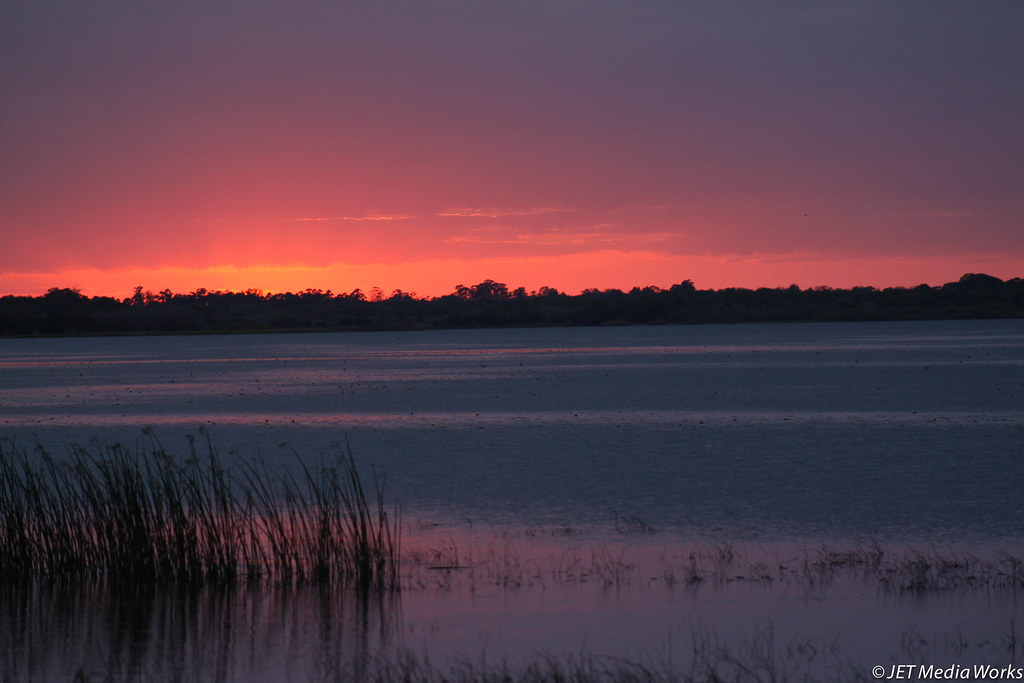 Within moments, this is all that was left along the Myakka River.
That's my kind of Friday night show!  Happy weekend, everyone!
Posted by SRQ at 8:44 AM 10 comments 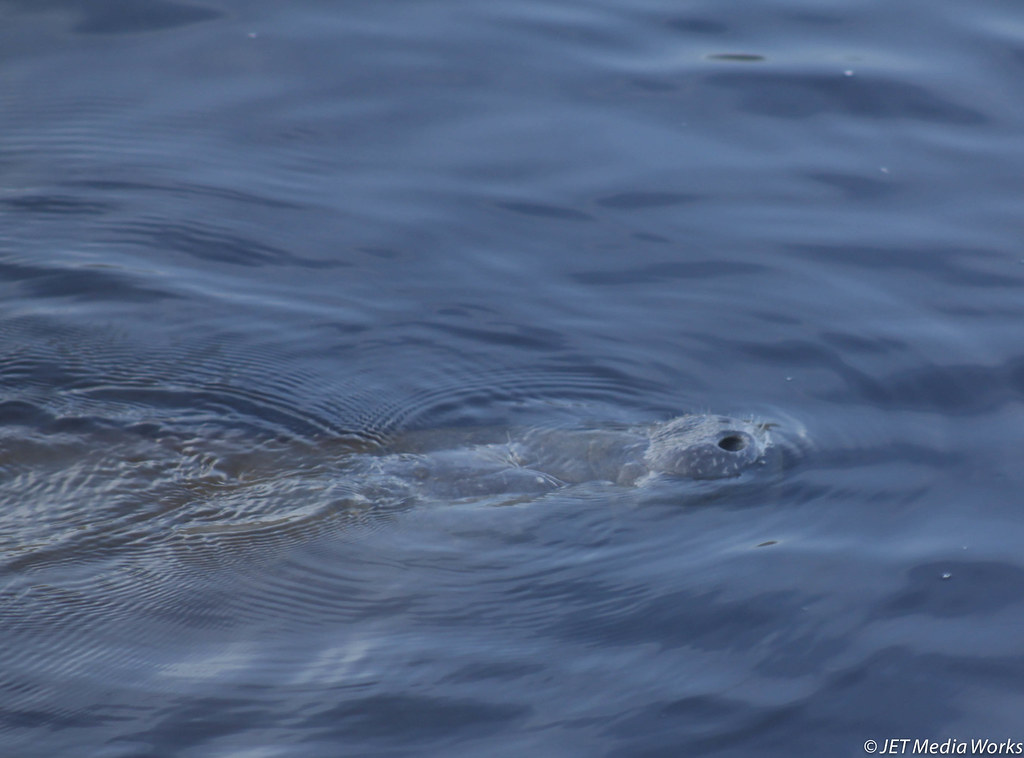 This is…..a manatee snout!  With the cooler overnight temperatures, this is the time of year to see manatees (or catch a glimpse of their nostrils as they come up for air).  Affectionately known as "sea cows", these large, hefty mammals float around shallow waters (fresh, salt and brackish) grazing on vegetation.  In the winter, they gravitate to power plants that discharge warm water. There's such a plant in Ft. Myers, so I headed out to a nearby park (Manatee park) early in the morning when the temperature was in the mid-40s.  Dozens of manatees were huddled around.  For as large as they are, they sure are quick!  They poke their nostrils out of the water, inhale, and go right back under.  For a wildlife photographer, it makes for extremely challenging shooting. 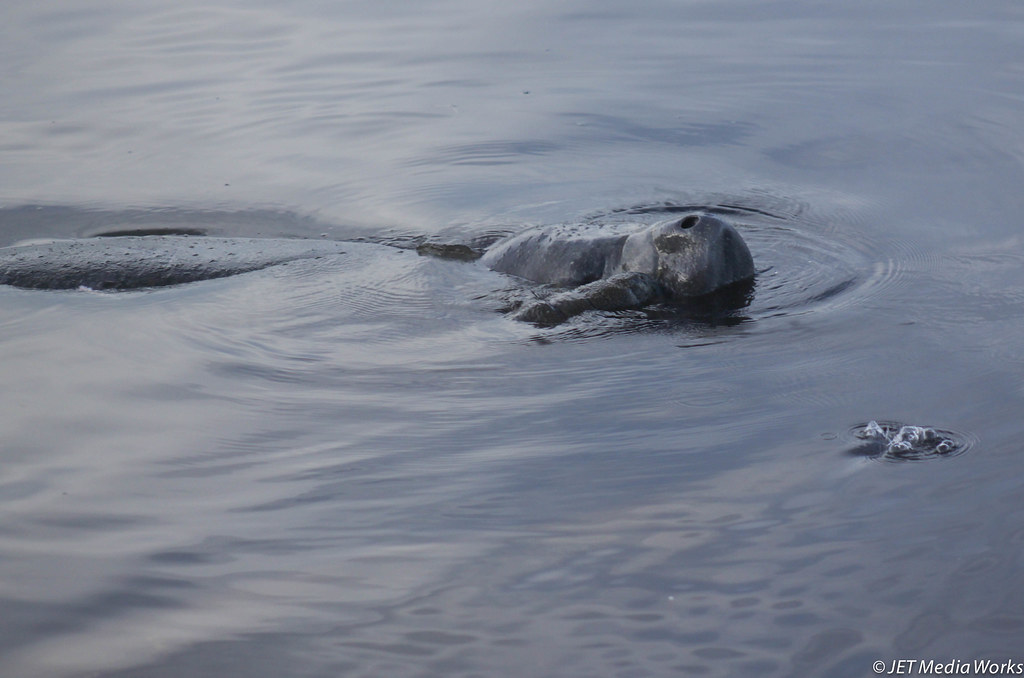 I shot dozens and dozens of frames and this was the best I could get…which I was disappointed with until, upon closer inspection, discovered this most likely is a shot of a mama manatee with a calf. (In that case, then…kudos to me!)  Zoom in under the nostril...and that blob looks like a baby manatee. 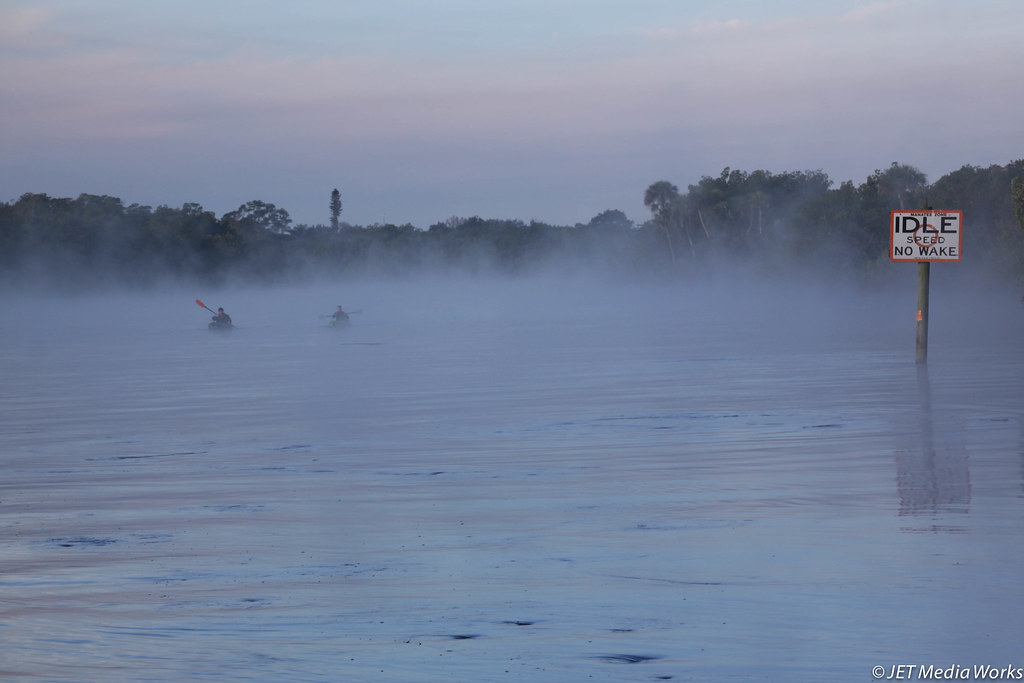 It was beautiful morning with kayakers pushing their way through the mist….no doubt looking for manatees.  Although manatees spend most of their time hidden underwater, there's an easy way to spot their  presence:   a small swirl on the water.  So, looking at the foreground of this photo, I would say several manatees were underwater right in front of me.

The "Idle No Wake" boating sign is in place specifically to protect the manatees, which can get seriously injured or killed by motorboats.  The U.S. Fish & Wildlife Service announced last month that it's considering downlisting the manatee from an endangered to threatened species (which has caused a bit of a dust up with wildlife conservationists here in Florida). 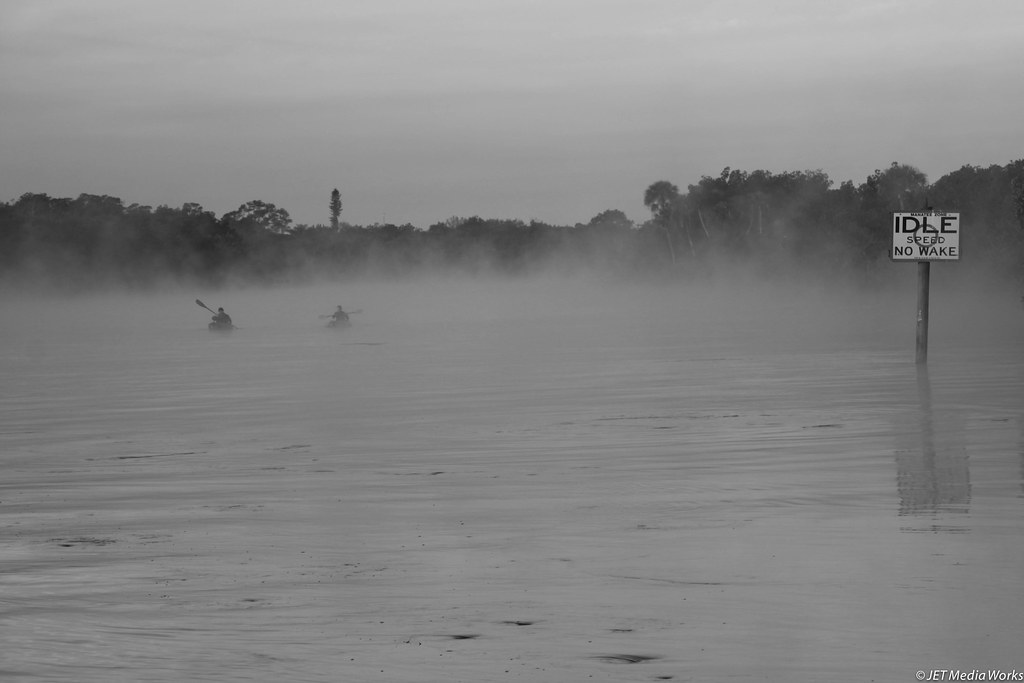 Although I like the kayakers in color…I tinkered around and converted it to black and white.  Moody!  Which do you prefer?
Posted by SRQ at 12:00 AM 6 comments 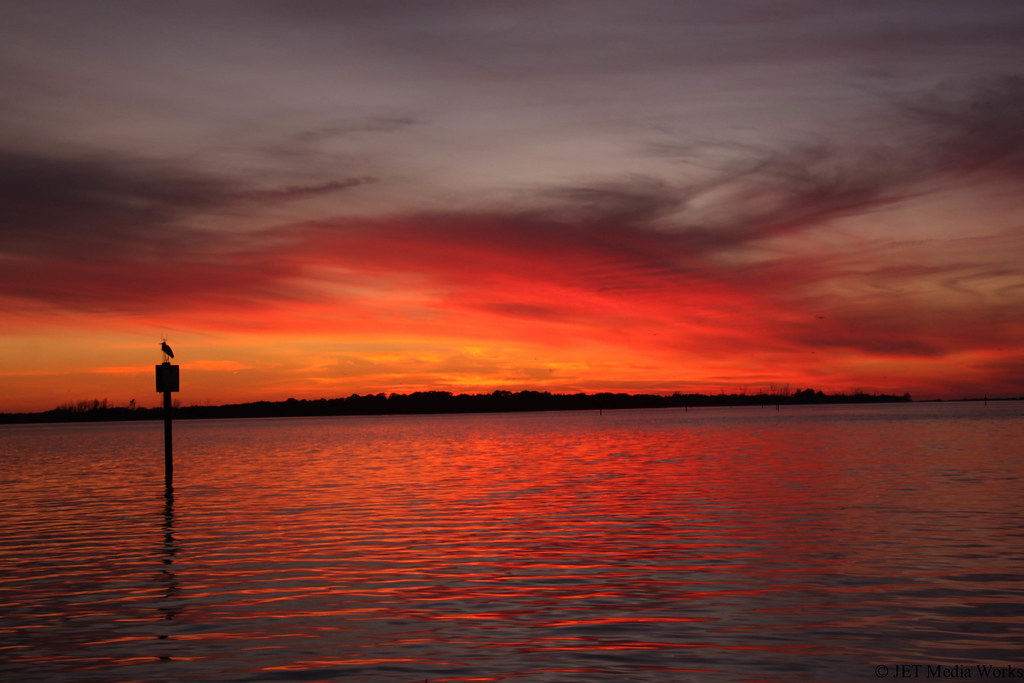 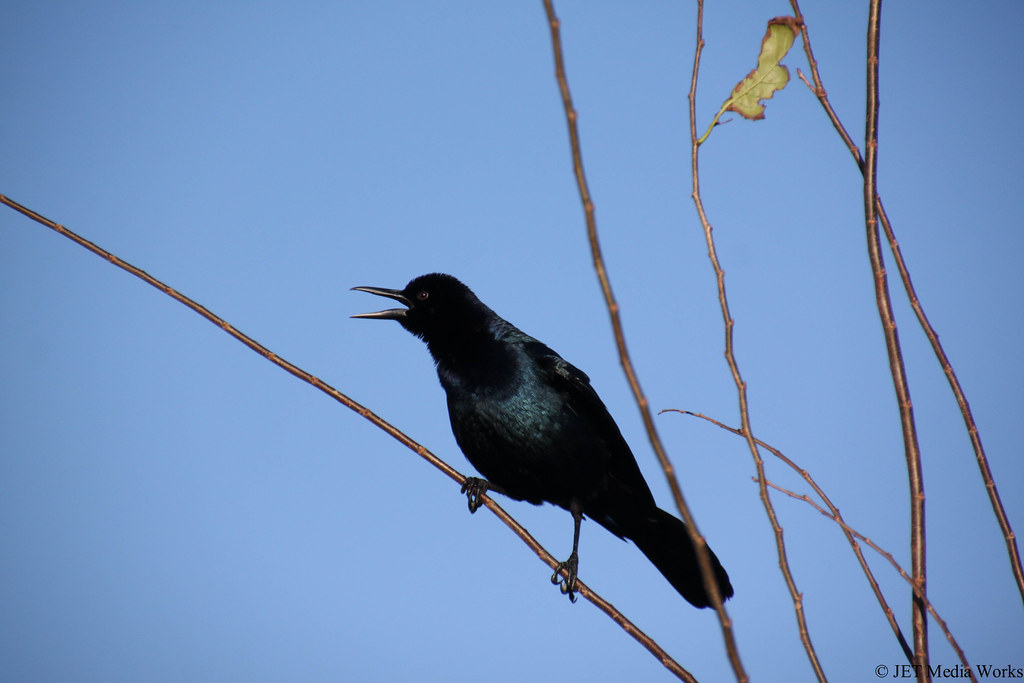 This bird was making so much noise calling to another similar bird nearby, I felt compelled to photograph it.  Now, the question is:  Is it a common grackle? Boat-tailed grackle? Fish crow? Or…perhaps an American crow? So many possibilities!

Based on the color throughout the body, I strongly suspect it's a grackle. So, with that narrowed down, I consulted my trusty Birds of Florida field guide. It says the boat-tailed grackle is more common than the common grackle (how about that for a misnomer?!) and the boat-tailed is described as a "noisy bird".  Two reasons to think it's a boat-tailed.  Also, apparently boat-taileds north of Gainesville, Florida have yellow eyes….and those elsewhere in Florida have brown eyes.  If you look closely, you can see this guy has a brown eye -- and Sarasota is south of Gainesville.  Check.  Gosh, this bird identification stuff can get tricky!  Perhaps if I get the chance, I'll consult with someone at the Audubon visitor center at the celery fields, where I spotted this guy. In the meantime, I'm going with boat-tailed grackle.  Unless someone thinks differently.
Posted by SRQ at 11:06 AM 8 comments 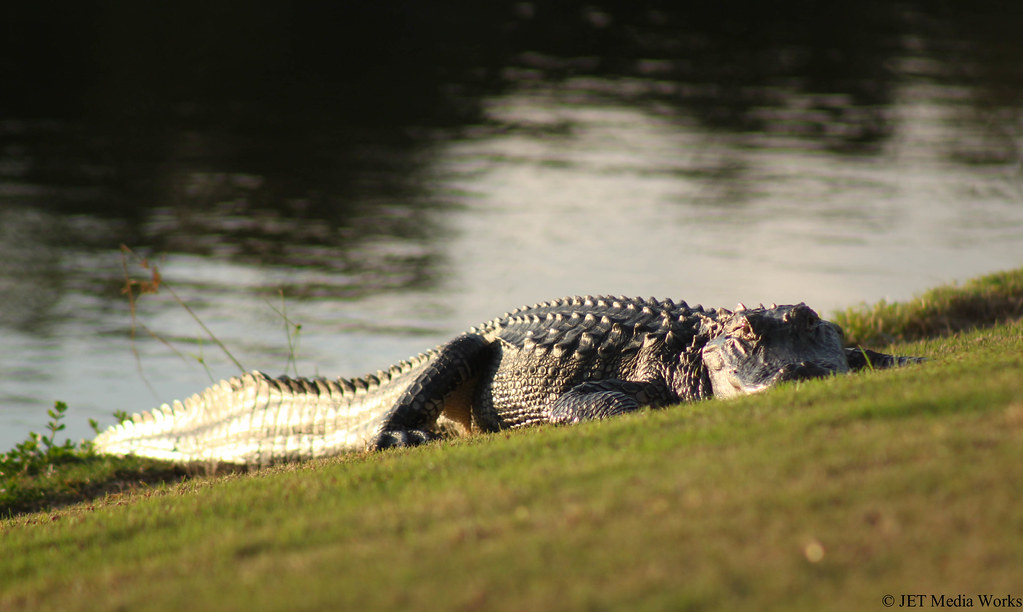 Recently, when I posted "Living in Harmony" showing an alligator peacefully co-existing with several birds, a few blogger friends commented that they couldn't believe the size of the gator and how close I was standing.  Actually, that wasn't anything!

A couple weeks earlier, at the same location, I spotted this monstrous fellow sunbathing along a retention pond across from the visitor center at the Sarasota National Cemetery.  He must've been at least 12-14 feet long -- one of the biggest gators I've seen in the wild in awhile.  Naturally, I couldn't resist taking a photo or two.  As I've mentioned many times, I have a healthy respect for wildlife, particularly gators, which, believe it or not, are quite speedy on land.  I was a fairly safe distance away but when this guy turned and eyeballed me, it made me uncomfortable enough to pack up immediately (after getting the shot, of course) and scamper away. 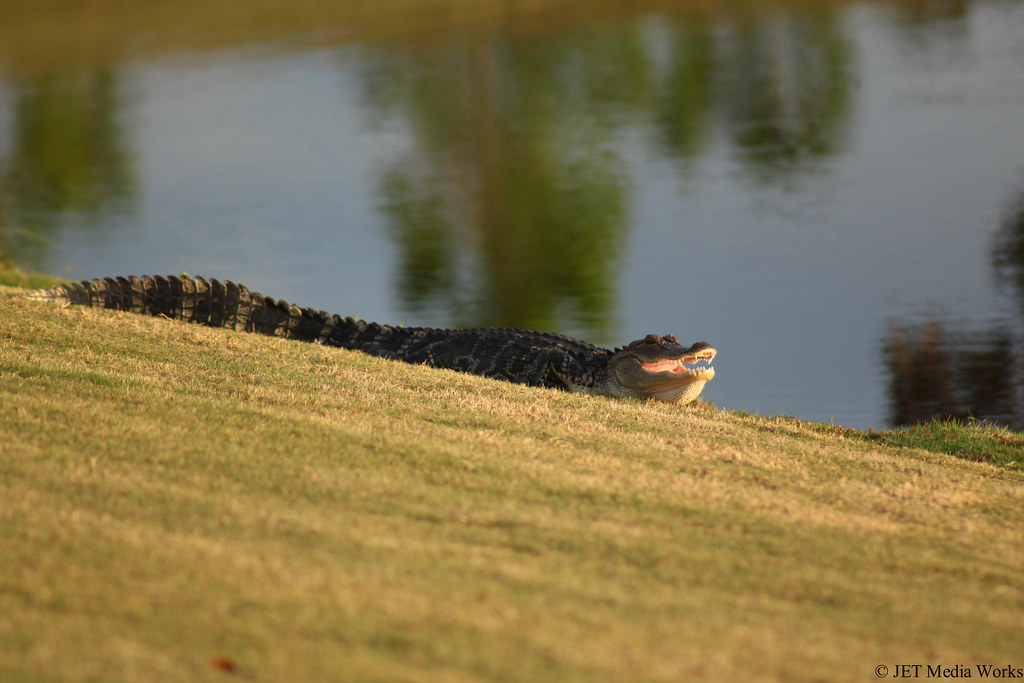 And…around the corner at the next pond I spotted this little sun worshipper.  Doesn't it look like he's smiling?  He was much, much smaller and did not appear aggressive.  Increasingly, the Sarasota National Cemetery is becoming a healthy ecosystem attracting a variety of birds and other wildlife. I've seen all kinds of herons, cranes, hawks, and gators and a security guard told me recently that a bobcat tends to prowl the area in the morning.  Happy Saturday!
Posted by SRQ at 11:28 AM 11 comments 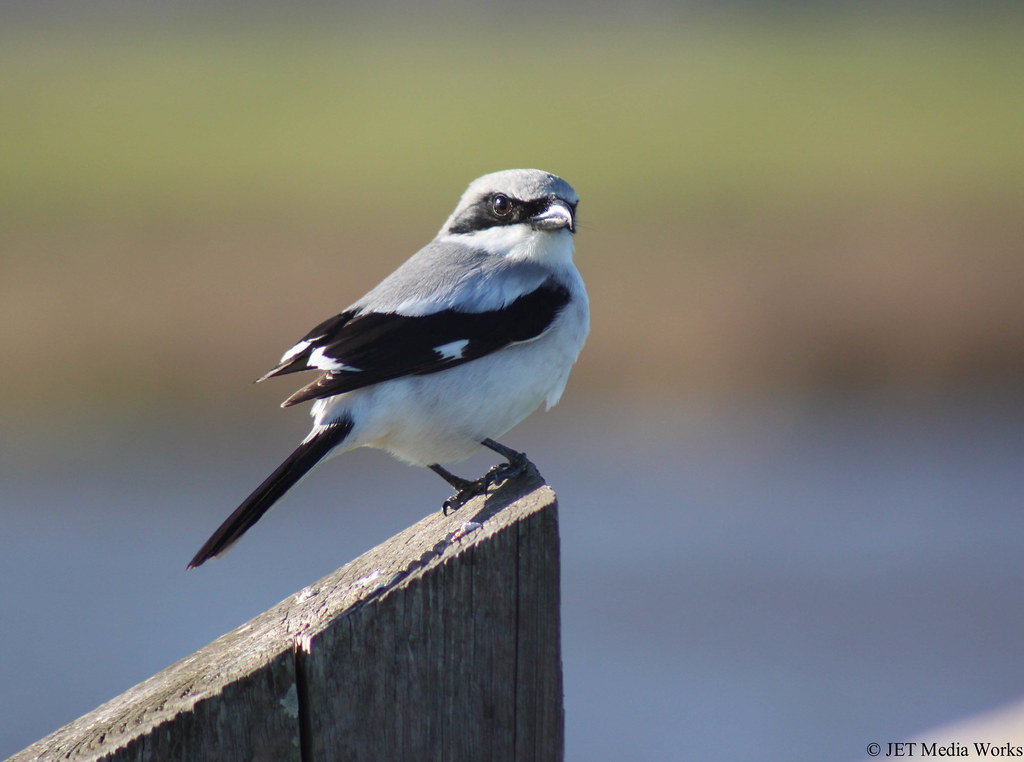 It's been awhile since I visited the celery fields in Sarasota.  It's now a formal birding area complete with an Audubon nature center, which, unfortunately, was closed when I visited last Sunday.  Following a short hike to a nearby retention pond, I spotted this little feathered fellow perched on a branch.  It was quite breezy and I was having difficulty composing a decent shot with the branch swaying.  Then, suddenly, the bird flew away and landed on a fence post just a few yards from me. And, then proceeded to pose for the camera. After consulting my trusty Birds of Florida Field Guide, I'm fairly confident this is a loggerhead shrike…although, with that black mask I think of him more as "Little Bandit".
Posted by SRQ at 12:03 AM 9 comments 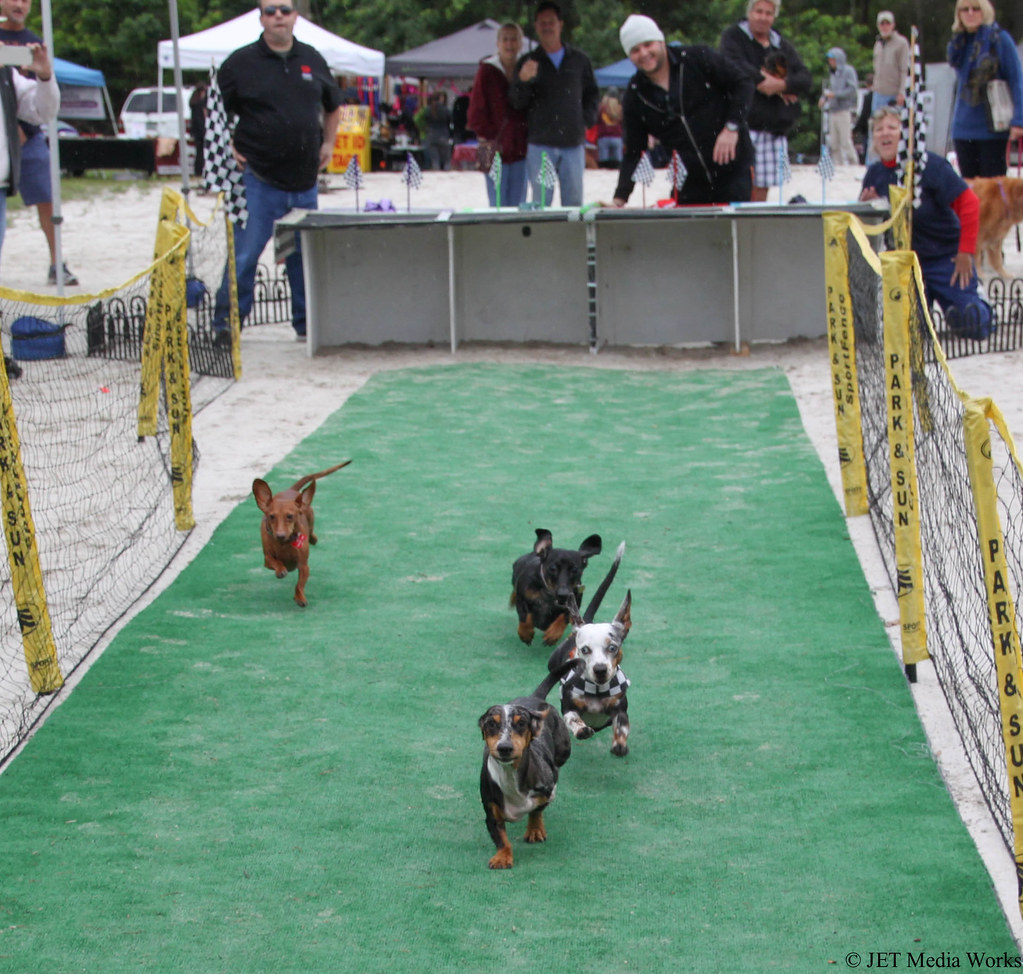 Since this event originated, I've wanted to check it out.  But, year after year, something has come up. At last, yesterday, I made it to the 6th annual Wiener Dog Derby.   It was chilly and raining, but the races went on as scheduled -- one heat after another with dachshunds dashing lickety split -- as fast as their cute little legs would take them -- to the finish line.  (Of course, occasionally, some of the little participants opted not to compete and either stopped or turned around and walked the other way.)  This shot was taken during the final race --- for the crown, bragging rights, and I presume, a few doggie treats.  Look at 'em go!  Ears flopping…paws mid-air..staring down the finish line.  So cute! 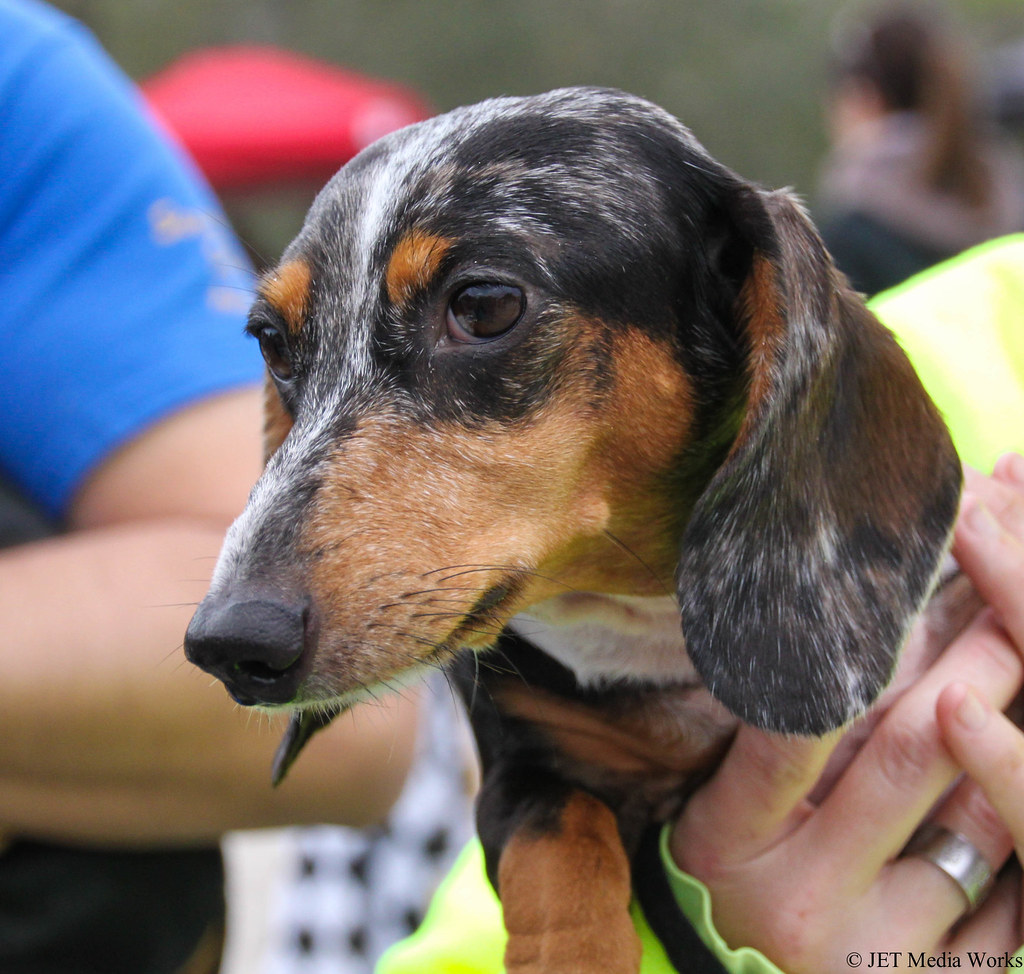 This is the grand champion -- Roxie.  I'm told she's 5 years old, the returning Sarasota Wiener Dog Derby champion, and apparently, a national champ as well. She's was proudly holding court after her victory.  Very sweet!  In case you're wondering, this is not an actual sport.  The Weiner Derby was one of many fun events going on at a pet friendly festival called the 'Celebration of Pets'.  So glad I finally made it!
Posted by SRQ at 12:03 AM 10 comments 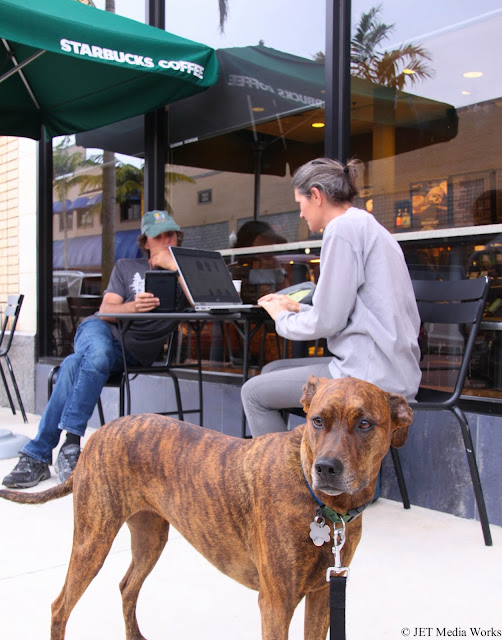 I really wanted to check out a new cafe in Ft. Myers for today's City Daily Photo theme:  'Scene at a Coffee House'.  Unfortunately, time did not permit.  But, as I dashed out of Starbucks yesterday with a latte in hand to fuel me for the drive back to Sarasota, I thought, 'Well, I can get a quick shot here for theme day…'  And, voila!  It's not exactly what I had in mind…but, I'm happy to be able to participate in Theme Day!

As these folks enjoyed a quiet respite outside Starbucks in downtown Ft. Myers reading their electronic devices, man's best friend in the foreground stole the show.  Her name is Pipi.  While she has an intense stare in this shot, I can assure you she's a sweetheart!  She was content at the outdoor cafe, greeting strangers politely as they passed by, while keeping a friendly eye on a neighboring cocker spaniel.  I'm told Pipi was rescued as a puppy four years ago after being abandoned alongside a road in Alabama.  She seems very good natured and gentle.  And, she must have good sea legs, too….because her owner mentioned they arrived in Ft. Myers via sailboat.  How about that?!  It's common to see dogs at outdoor coffee houses nowadays, and I always enjoy hearing their stories.  To see other interpretations of today's Theme Day -- Scene at a Coffee House -- from other City Daily Photo bloggers click here.