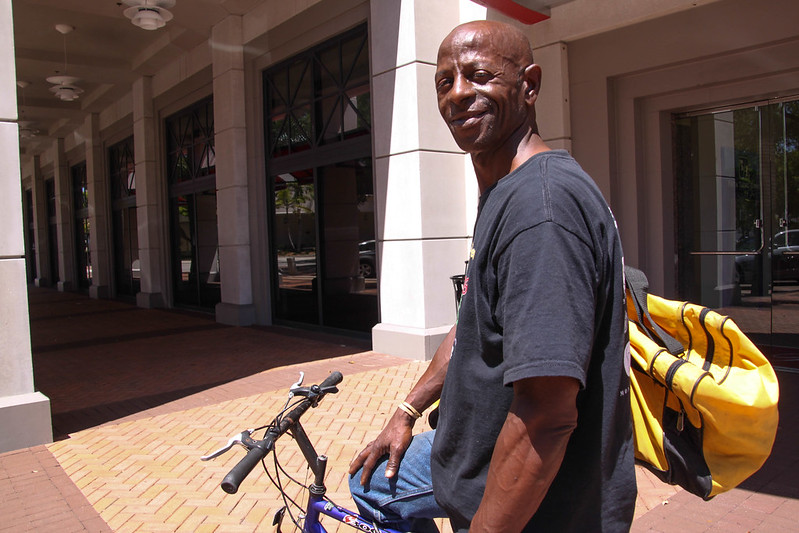 I met James in downtown Sarasota Sunday afternoon when I was taking photos and he excitedly asked me if I had gotten a shot of talk show host Jerry Springer who had just driven off in a Bentley.  Nope.  I was focused on a pink flamingo bicycle.  (Photo forthcoming on SDP)  But, I mentioned that Jerry lives in Sarasota and I've bumped into him in that area of downtown at a business he frequents.  James said he really wanted to see what Jerry Springer was like in person -- so, he knocked on Jerry's car window as he was starting to drive away.  (That would be the Bentley car window.)  You know what Jerry did?  According to James, he rolled down the window, said hi and shook his hand.  That made James' day!  Which is nice because he ended up telling me he's going through some challenging times with housing and work.  He moved up here a couple of weeks ago from Naples expecting more opportunities, but after coming up empty on job leads, he plans to head back south.  When I asked him which of our many charitable organizations and programs in town he'd contacted (he had no way of knowing he was talking to SRQ), he mentioned many that I would have put him in contact with --- but, he said he's ready to return to Naples, where, he says, jobs are more plentiful.  It was a nice, unexpected Sunday afternoon encounter with someone who was engaging and seemed quite sincere.  I wish James all the best!
Posted by SRQ at 12:03 AM

I wish James all the best too. It's not easy finding work these days, We've had a really tough time ourselves here in AL and we were wondering if we should have chose FL instead. I'm glad JS shook James' hand and made his day. It probably gave him a lift that he needed.

Nice photo SRQ. For a guy that is down in his luck he looks pretty happy.

Good luck to James, SRQ. We don't know anything about his skills, but his positive attitude should count for something.

Very interesting human interest story and delightful portrait. Times are tough for too many people.