I is for Ichthyology 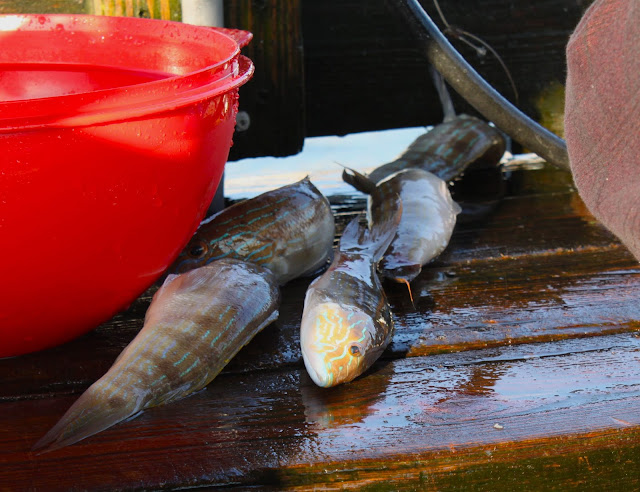 The brain functions in odd and mysterious ways. The first time I read the word 'ichthyology' (probably in Prof. Peeble's nat sci class at Michigan State University), for whatever reason, it stuck with me. I've always remembered ichthyology is the study of fish. In my previous life, when I was working on a news story, I was chatting with a guy who had sharks delivered to his house so he could dissect and study them. I nonchalantly said, 'Ah...so, you're an ichthyologist.'  His eyes widened and his jaw popped open as he exclaimed, 'Yes! Yes...I'm an ichthyologist!'  And, that, more or less, is the extent of my nat sci knowledge. 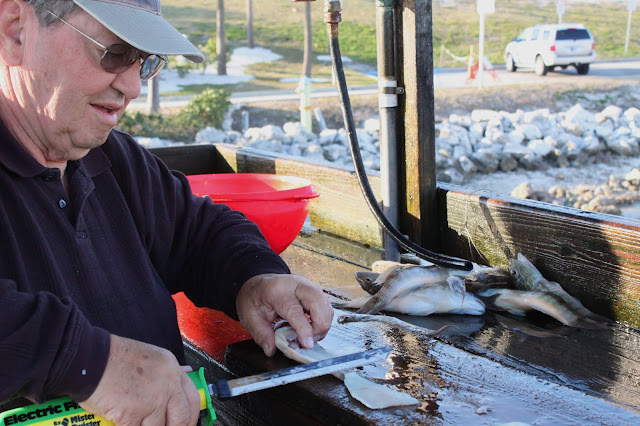 I encountered John Miller at Hart's Landing in downtown Sarasota as he cleaned a haul of fish that he and his wife, Lydia, caught. They ventured 26 miles into the Gulf of Mexico in somewhat choppy waters and caught 40 perch. John was skillfully using an electric knife to fillet his catch, which I thought was rather clever and quite effective. 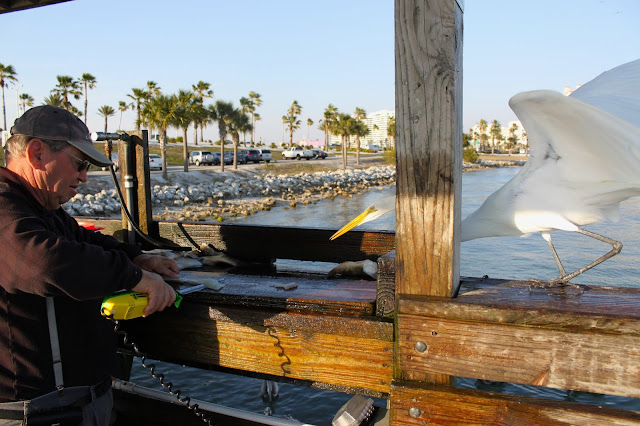 As you can see, I wasn't the only one interested in what he was doing.  The egrets and pelicans were close at hand studying the fish, and John didn't mind if they quickly darted in to snatch a small piece for dinner, like this egret.  Gosh...they're quick!   And, when John tossed a carcass into the bay -- look out!  It created an instantaneous pelican feeding frenzy. The Millers split their time between Sarasota and Indiana. (The fishing is much better here right now, isn't it?) Nice meeting you and thanks for the photo opps.  I'm linking to ABC Wednesday.
Posted by SRQ at 12:02 AM

Incredible that the birds come so close! That fish must be delicious!

That top photo is a work of art. And I love it when the right word bubbles up at the right time. Usually after I've had a lot of coffee

Love the setup of your first shot.

A perfect "I" for Florida. Love the photos and the write up even more!

Oh I love fresh caught fish--he looks very skilled in the art. Our summers were spent at our cabin and my Mom would cook all the fish Dad, me and my sisters caught.
Ann

Very nice environmental portrait of John Miller slicing up the perch. Love the shot of the 'hawk-eyed' egret watching so intently.

I love this I word, I've not heard it in ages (well, since my own last nat. sci class many moons ago). I'm sort of daydreaming over how good that fish must taste!

I love that last shot, as long as the egret stayed clear of the electric knife. You caught a perfect moment; that bird was so ready for action!

I can just smell that fish. Looks such a glorious Florida day. Super 'I'.

That is such a great picture with the Egret sneaking a bite!

When I saw that big "icky" word in your title, I knew something was fishy. I can smell them from here. :)

Nice series of photos, though. I've spent many hours "cleaning" fish (in my younger days)!

You are so erudite, Miss SRQ. I am impressed. An, was there really a Professor Peeble? And, were you interviewing Doc Ford?

something fishy about this post - in a good way!

It's such a pleasure learning something new each day..love the last shot with the hungry egret.