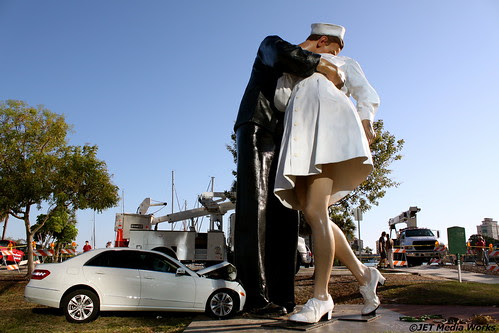 This was quite a sight yesterday along the bayfront in Sarasota. A driver passed out, hopped a median, and crossed two lanes of traffic (miraculously without hitting any vehicles) before crashing into this 26-foot-tall statue entitled "Unconditional Surrender".  Somehow the driver wasn't seriously injured.  The statue was created by world renowned artist J. Seward Johnson in 2005 and was modeled after Alfred Jorgensen's famous V-J Day photo of a sailor kissing a nurse in Times Square.  The statue is on loan to the city from the owner and the Sarasota Arts Foundation.  And, it's quite a popular attraction.  It's common to see people having their photo taken next to the statue as they re-enact "the kiss". So, how much damage was done to the statue? 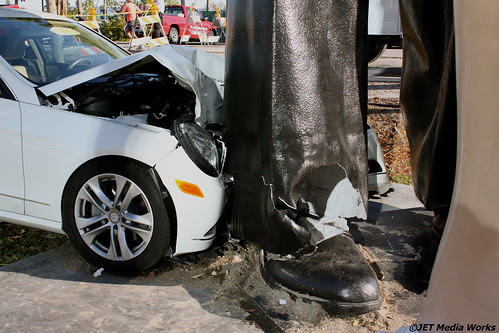 This shattered leg is just a portion.  There are so many fractures running up the sailor and nurse, a crane was called in to lower the statue to the ground.  It'll be up to the owner and the Arts Foundation to decide how to proceed to repair it.  To see pre-accident photos of the statue, click here.   Don't forget to vote in the SDP poll!
Posted by SRQ at 12:01 AM

Unique documentary!
Good that the driver was not seriously injured.

Perhaps the driver was distracted by the kiss!

I must admit, I had to stare at that first picture for a minute to figure out just what I was looking at. It's almost surreal. Too bad about the statue but thank goodness, nobody was hurt.

Oh good grief! I remember that photo in Life magazine way back when!

But big monuments like this can be a distraction. The driver was probably staring at the statue and ran right into it!

Hopefully, it can be repaired.

Glad the driver was not injured. Sad that the statue had some damage though!

That's a little ironic don't you think SRQ, the title of the statue and the occurrence!